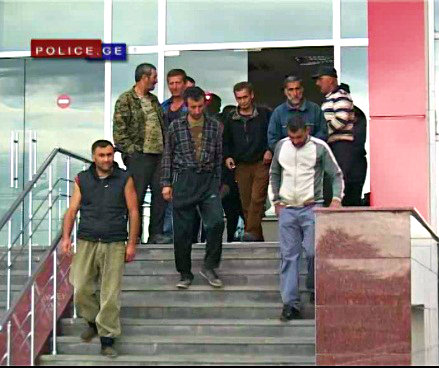 The eleven had been detained for crossing the border into South Ossetia, a Georgian breakaway region which Russia has propped up for over twenty years. (Police.ge.)

TBILISI, DFWatch–Eleven more Georgia citizens have been released from their detention by Russian soldiers. They were detained earlier in May for crossing the border with South Ossetia.

The release on Wednesday came after the Ministry of Interior had held negotiations with the de facto government in Tskhinvali.

On Thursday there was a new report about the detention of Vasil Salamashvili, 30, near the village Sakorintlo, which borders with the conflict region.

Locals are concerned about the detentions and ask the government and the international community to react. They also ask for more information about where the border is.

Minister of Reintegration Paata Zakareishvili yesterday told journalists that these kind of detentions have not become frequent, and that Georgians are released sooner than usual.

“I once again had to go to Tskhinvali on a humiliating visit to ask Kokoity to release our youth. Earlier Ossetians used to detain and hold them for months, but now they are released in a few days,” the minister said.

The European Union’s Monitoring Mission to Georgia (EUMM), however, issued a short statement expressing concern about the increase in detentions near South Ossetia.

“Restricting freedom of movement directly affects the livelihood of the local population, an issue the Mission continues to monitor closely within its mandate,” its office writes in a statement published May 8.

In the beginning of May more than 20 Georgian citizens were detained in total, and the majority of them were out collecting jonjoli, a shrub used to make marinade.

“The word ‘jonjoli’ has made it into the headlines of world conflict research as people are detained for collecting it,” Zakareishvili said.