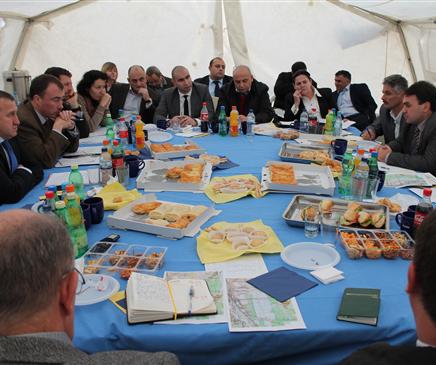 According to the Interior Ministry, Georgia raised the issue of the installation of barbed wire and fences by Russian soldiers in the villages Ergneti, Ditsi and Atotsi-Knolevi.

The measure, often called borderization, is creating problems for locals in their everyday life, because the fences cut through populated areas.

The parties also discussed events on Election Day October 27, when Russian soldiers with weapons threatened a man in the village Khurvaleti and several strangers insulted a journalist from Maestro TV during a live broadcast.

As usual, Georgia raised the issue of detainees who are detained in Tskhinvali for violating the de facto border.

The meeting was held at Ergneti as usual and facilitated by the head of the EU Monitoring Mission (EUMM) Toivo Klaar and Ambassador Andrii Deschystsia, who is special representative of OSCE.

“Participants agreed to resort to all means of communication, including the Hotline and more direct channels, to find ways to alleviate the arising issues of local residents,” a statement by EUMM reads.

“Participants reaffirmed their commitment to fully utilize the potential of the IPRM format in order to identify practical solutions to problems on the ground.”

The next IPRM meeting will be held on December 9.