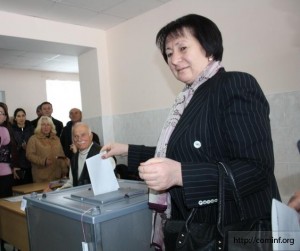 "We live in a state where rights, laws and liberties are violated by those who should be defending them," said Alla Dzhioyeva in March. Here she is casting her vote November 27, 2011; an election she won. (RES.)

TBILISI, DFWatch – An opposition leader in South Ossetia who refused to acknowledge the last election has been appointed Vice Prime Minister in the breakaway republic.

Alla Dzhioyeva boycotted the elections in March and April, but that didn’t stop the winner, Leonid Tibilov, from appointing her as his deputy today, with responsibility for social services, according to Ria Novosti.

The new vice premier has campaigned against the sitting regime and rejected the last election as illegitimate. She won an election last year, but the election was cancelled, and when she refused to give up, she was grabbed by militiamen and forced to stay weeks in a hospital.

Upon her release, she said: “We live in a state where rights, laws and liberties are violated by those who should be defending them.”

But now the opposition figurehead says South Ossetia should restore its image as a functioning state.

“We need to be rehabilitated in the eyes of Russia and the world community,” Dzhioeva told RIA Novosti.

Dzhioyeva tried to run for president in November, but the election was cancelled just when it looked like she was winning.

Refusing to accept the Supreme Court’s ruling cancelling the result, she mobilized supporters on a square outside the government building in Tskhinvali.

A compromise was negotiated in December, and the protest was called off, then revived later on, with Dzhioyeva proclaiming herself as the rightfully elected president. The day before she was to have held her inauguration, militiamen entered her offices, and forced her away to the hospital, where she was kept for several weeks against her will.

Soon after Tibilov was elected in April, the former presidential candidate established her own party. She has been perceived as strongly opposed to the current regime until she was appointed Vice Prime Minister today.