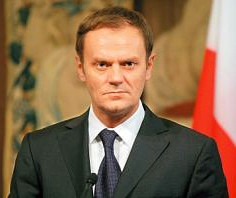 TBILISI, DFWatch–President of the European Council Donald Tusk will arrive in Tbilisi on July 20 for a two day visit.

Tusk was invited by President Giorgi Margvelashvili. The two will have a bilateral meeting, and afterward answer questions at a joint press conference.

The visit will also include meetings with PM Irakli Garibashvili, Speaker of Parliament Davit Usupashvili, as well as representatives of opposition parties.

Tusk’s trip will end on July 21. His first visit to Georgia as president of the European Council was originally to have taken place on July 14-15, but was postponed due to the crisis in Greece.

According to the Foreign Ministry, Tusk plans to go to Khurvaleti to observe the situation there after Russians moved the border a few hundred meters.