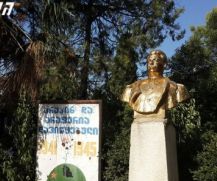 TBILISI, DFWatch–A bust of Joseph Stalin was re-erected in a Georgian village Monday night. It is unknown who put it there.

The reemerged bust is located in Akura, a village in Eastern Georgia.

After the change of government in Georgia in late 2012, busts and other monuments of Stalin appeared in a number of small villages.

They were usually put there by elderly people, who collected money to make or refurbish old Stalin busts.

One of the places is Akura, where a bust of the Soviet dictator has been placed on display a number of times during the last two years.

A few months ago, a Stalin bust was paint bombed in Akura and later dismantled.

It now stands on the village square at a monument dedicated to those who died in World War II.