‘Dish protest’ in front of parliament

‘Dish protest’ in front of parliament 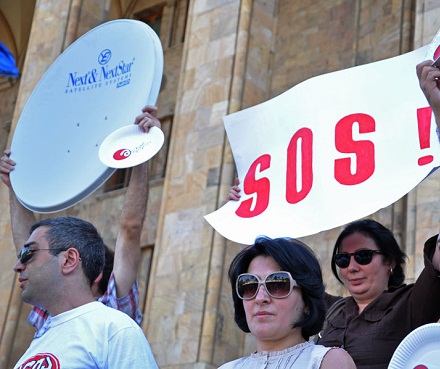 Around sixteen thousand satellite dishes have been taken away from Maestro TV by the prosecutor's office, which accuses them of trying to bribe voters into voting for the opposition. (Photo: Mari Nikuradze.)

TBILISI, DFWatch – Media workers and others demonstrated in front of the old parliament in Tbilisi Wednesday in support of Maestro TV. They demanded the immediate return of equipment seized from the company. 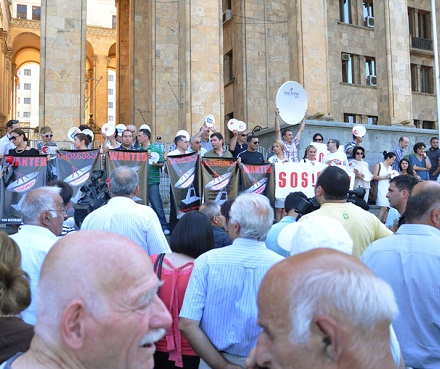 Fans of Maestro showed up outside parliament, where they got a chance to have a close up look at some of the channel's most well-known faces. (Photo: Mari Nikuradze.)

“I came here to support the TV channel which I most prefer to watch among Georgian channels,” one TV viewer tells DF Watch. “These actions are a shame for our government, they go through free media by tank, and don’t want to have broadcasters with different views.”

The rally lasted about half an hour. Maestro journalists and other organizers were holding posters which showed satellite dishes with a label saying ‘Wanted, suspected of distributing free media’. It was a response to the Prosecutor’s Office suspicion that Maestro TV planned to bribe voters to help the Georgian Dream coalition by giving satellite dishes to people for free.

But Maestro denies the charges and claims that the satellite receivers were handed out among people as part of a marketing campaign to get more viewers, especially in the regions.

The company has asked the Prosecutor’s Office to undo the seizure, as well as appealed to the courts. Representatives of the company say if needed they will take the case to European courts.

As a sign of protest, organizers and participants signed one large satellite dish, which organizers say will be sent to the president. Supporters of Maestro crowded around the dish to sign.

Lasha Tughushi, editor of the daily newspaper Rezonansi and one of the organizers of the rally, said that the rallies will continue until the seizure is revoked — permanently.

Up to 16 000 satellite dishes have so far been taken from Maestro by authorities, according to the company’s director Ilia Kikabidze.