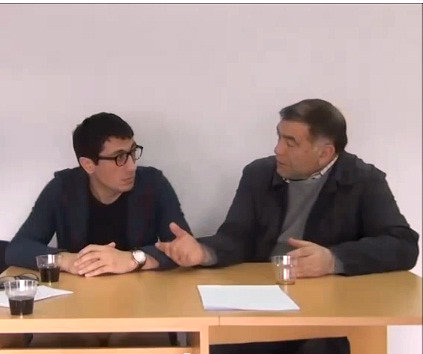 TBILISI, DFWatch–Representatives of NGOs working with minority issues took part in a discussion organized by DFWatch.net about how ethnic minorities often lack skills in Georgia’s only official language – Georgian.

Agit Mirzoev, Executive Director of Analytical Center for Inter-ethnic Cooperation and Consultations, and Ali Babayev, from the Congress of Georgian Azerbaijanis, sat down in our office and discussed what problems are creating obstacles for ethnic minorities being more involved in political life.

Both agreed that the main problem is a lack of knowledge of the state language, though they had different opinions about what causes this problem.

The main problem, Babayev argued, is that people who hold leading positions are not replaced, there is no competition to appoint new people to high positions. This takes away the motivation for people to get involved in political processes. If ethnic minorities lack knowledge of the state language, he said, it will be easier to control them. In regions where this is the case, officials still have a particular authority, so locals vote for the candidate who represents the government.

Mirzoev contradicted him, claiming that main problem is lack of motivation to study language and considers that government and NGOs should try to give them this motivation.

They also discussed government policy toward addressing this problem. Babayev said the problem is a lack of professional teachers, while Mirzoev said there are no adequate programs. Qualified teachers have been sent to regions to teach the state language to ethnic minorities since 2011, he said, but the program did not yield any significant result.

“Teaching language is a long process” Mirzoev said, and added that th egovernment should think about strengthening their motivation to study.

Ali Babaev said that not only the government, but also the media and NGOs should work on improving language skills.