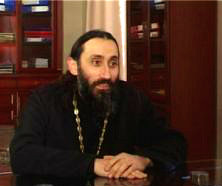 TBILISI, DFWatch–One of the most prominent and famous representatives of Georgian clergy, Teodore Gignadze, Saturday held a lecture at Tbilisi City Court.

Gignadze is head of Cross Ascension Monastery and has become famous for his controversial statements regarding sexual minorities, Stalin and blacks.

Among his most controversial statements is defending the racist idea that black Africans were “blackened” by their sins, known as the Curse of Ham; a notion used in the 17th and 18th centuries to justify the slave trade.

The lecture at Tbilisi City Courts was titled ‘The Basics of the Law of Believers’ and was followed by a question and answer session with court staff.

Gignadze’s long speech dealt with topics such as human psychology, justice and courts, religion, sin and punishment, and revenge.

He said the government should improve its own citizens and they must do it through legislation.

The government should want its citizens to be better in ten and twenty years, Gagnidze continued, and used Germany as an example, saying that there are examples of such experiences in the past which must be used.

Legislation should define what it is to be a better person, the cleric explained, and offered examples from the literature, continuing with the Bible.

A video of Gignadze’s lecture has mostly negative comments, claiming that he is racist, sexist and homophobic and “it’s a shame to invite such a person to the court”.

The controversial preacher was invited by the court itself, according to the Facebook page of Tbilisi City Court, which plans to continue conducting what it calls ‘educational activities’ in future.