TBILISI, DFWatch – Georgia’s honorary consul in the United States says the reason he was dismissed last week was that he refused to take down photos from his Facebook page showing the popular opposition politician Bidzina Ivanishvili meeting with the U.S. ambassador to Georgia. 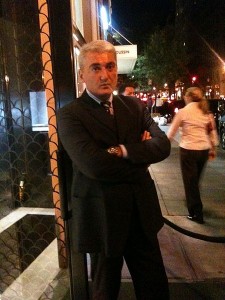 Just four months ago, Lasha Darbaidze was the subject of praise on a TV show called Imedi Heroes, aired on one of Tbilisi’s government friendly TV stations. The laudatory portrait concluded that he was carrying out his Washington duties graciously.

But like others who have expressed support for a new political contender in the last few weeks, his luck suddenly changed. First his Georgian citizenship was revoked, then he was dismissed from his post as Honorary Consul.

Mr Darbaidze has explained that the reason for his dismissal was that he had published a picture of the government’s main opponent on his Facebook page and refused to remove it when prompted by an unnamed person he believes was working for authorities in Tbilisi. He calls the October 24 dissmissal ‘political persecution’.

But from Tbilisi, the story is different. The government claims that Mr Darbaidze had not been carrying out his duties properly. Deputy Foreign Minister Nino Kalandadze said this at a weekly briefing Monday.

“The Foreign Ministry conducts periodic monitoring of diplomats as well as Honorary Consuls, how properly is this or that person fulfilling his or her responsibility. As a result of a review a decision was made to dismiss Darbaidze. Other consuls will share his fortune if conditions won’t be met,” Mrs Kalandadze warned, not specifying what exactly it means that Darbaidze didn’t fulfill his obligations.

Lasha Darbaidze claims that a person representing the government asked him to delete a picture of Bidzina Ivanishvili from his Facebook page, but he refused.

He says that on October 24 some person met him in USA and demanded that he deleted the photos from Facebook. The diplomat did not disclose the person’s identity, but he said he knows that it’s someone working for the Georgian Government.

The photos in question depict a meeting between Mr Ivanishvili and U.S. ambassador to Georgia John Bass.

“I objected and refused to delete the photos, and one day later they cancelled my authority. When I asked – why do I have to delete photos, they answered – we have popularity in Georgian diaspora and our interest towards this person would have a wrong effect on people and would give a certain stimulus,” Lasha Darbaidze said.

In his view, the dismissal is part of a political game, which for him started on October 13, when he received a document saying that his citizenship had been revoked nine days earlier. The October 4 presidential decree explains the decision with the fact of him obtaining citizenship of another country. Mr Darbaidze also is a U.S. citizen.

DFWatch called the president’s administration to try to clarify when Darbaidze received a second citizenship and when Georgian authorities became aware of this, but they did not answer our questions.

Lasha Darbaidze himself explains that he obtained a U.S. citizenship a year and a half ago and the government was informed about it at the time. That’s why he thinks it raises question when his citizenship is revoked at this moment.

“They revoked my citizenship two days after Ivanishvili’s citizenship was terminated. I can’t understand such a coincidence,” Darbaidze says.

The official document about his citizenship termination is dated of October 4, 2011. This decree revokes the citizenship of 38 persons including Mr Darbaidze. Ivanishvili’s citizenship was revoked on October 11.

Opposition parliamentarien Gia Tsagareishvili of the Free Democrats doesn’t exclude that Darbaidze’s citizenship termination was put on a list with many others, a list which although made known to Darbaidze on October 13 is dated before Ivanishvili launched his campaign on October 7, thereby making it appear that it was unrelated.

Lasha Darbaidze has been living in the USA since 1999 and is involved in private business activities. He obtained a U.S. citizenship in 2010. In 2004 he became president of the Saint Giorgi foundation. He was appointed Honorary Consul of Georgia in 2010. In June 2011 Georgian government friendly channel Imedi portrayed him on the show Imedi Heroes. The special dedicated program showed him as successful and concluded that he was carrying out his duties graciously.

Georgian financier Bidzina Ivanishvili launched a political campaign three and a half weeks ago and has won over a large part of the Georgian population. The nation seems to have for the first time a real choice with a challenger who could win an election against president Mikheil Saakashvili.

Since October 7 Mr Ivanishvili has been subjected to a series of misfortunes at the hands of various branches of the Georgian government which he claims are politically motivated. After his citizenship was revoked it became illegal for him to stand in elections and fund parties, and recently the ruling party proposed a new bill which would also prevent him from indirectly supporting the opposition through one of his companies. Two representatives in Tbilisi city hall were dismissed last week after allying themselves with Ivanishvili.