TBILISI, DFWatch – A scuffle developed outside an important Tbilisi landmark before the weekend, as officials tried to stop Georgian tycoon Bidzina Ivanishvili’s renovation work on the building. 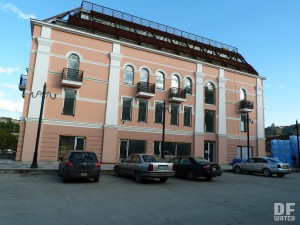 The castle of King Rostom, who reigned parts of present day Georgia in the late 16th century, has been under renovation for the last few years, but work was abruptly stopped Wednesday as officials from the Supervision Service arrived and demanded a halt in the maintenance work and forced the workers to leave the area.

The Supervision Service is a Tbilisi City Hall body which monitors buildings and constructions.

Strangers Sunday arrived at the premises and said they were from a company called Light Group Ltd, and that they would take over the restoration work. The individuals were able to present a document which appeared to be a lease agreement signed with Property Managament Ltd on October 1, stating that Property Management has transferred the building’s first floor of a spacious 150 square meters to Light Group.

But the tycoon’s company Cartu Group is defending their ownership to the whole building, and has given Light Group Ltd until 15:00 of October 31 to present a document which gives them permission to conduct renovation work at the Palace, “if they have any”. Otherwise, the tycoon’s company will reserve the right to treat the development as criminal intrusion.

“Note that the palace of King Rostom is the property of New Capital Ltd, which is a part of Cartu Group and it has never transferred any property with a right to use to Property Management,” Sunday’s press statement says.

On October 26, when Supervision Service workers stopped the maintenance workings, they explained it with irregularities in the work. But on Saturday they claimed that besides 26 October’s resolution, ‘renovation works is not prohibited in the palace.’

According to the statement, the controversy between Light Group Ltd and New Capital Ltd lasted for several hours. New Capital had suggested taking renovation materials into the first floor and signing an agreement to store it there until November 1. At first they agreed, but later they changed their mind explaining that they had consulted with an attorney.

“Finally at 21:00, Light Group took the materials into the palace and began renovation that lasted the whole night,” the press office writes.

“New Capital says that Light Group has no legal basis to enter the Palace; so the entrance into the palace and illegally beginning the renovation is illegal intrusion of another’s person’s property.”

On October 26 the Supervision Service fined Cartu Group 4000 GEL and demanded that they eliminate the defects within 20 calendar days.

According to the tycoon’s press office, Cartu Group had finished exterior renovation in August 2011. Later they appealed to the Supervision Service to check the object to continue with further work. Supervision Service workers should have come by October 13; but they only had appeared on October 26 and then they stopped the maintenance work.

On October 28, Tbilisi Citi hall issued a response to Ivanishvili’s press office, writing that their accusations are ‘unreasonable, unlawful and politicized.’

According to the statement, New Capital applied on October 1 and it was applied by an ‘unauthorized’ person.

“The Supervision Service has sent a warning message to correct the defect. Considering the fact that large companies are coming into this business-center whose operations are very important for the city; Tbilisi City Hall announces a commitment since authorized person submits amended draft of the business-center project, the company is given the opportunity to continue the work of the business – at the center,” the City hall statement reads.

It goes on to say that the process of making use of this building begun earlier and claims that to say that this action is connected with Bidzina Ivanishvili’s activities are “groundless.” 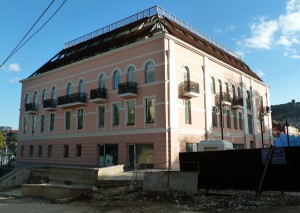 Cartu Group was also deprived of 3000 square meters of land beneath the Palace. Ivanishvili’s press office writes that Cartu group bought the land from the government in 2010 for a 59 year term and was planning to build an underground garage.

“City hall without any warning and explanation confiscated the land for underground parking for 100 cars from Cartu Group,” the press office of Ivanishvili writes.

City Hall responded that the land was transferred to New Capital with a right to build a garage for public usage and not for a specific object.

King Rostom, whose title was King of Kartli, built the palace in 1638 in what is today called the old district of Georgia’s capital Tbilisi.