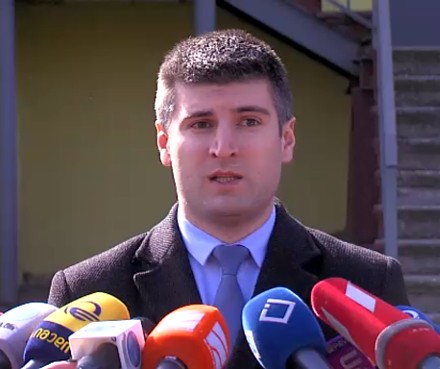 TBILISI, DFWatch–Prosecutors in Georgia are still unable to interrogate archpriest Giorgi Mamaladze who is accused of murder attempt of an unidentified person from patriarch’s inner circle.

“Instead of responding to our critical questions, he cursed us, and generally all law enforcement agencies as well,” prosecutor Jarji Tsiklauri told journalists.

Tsiklauri was addressing the media after another unsuccessful attempt to interrogate the accused priest in Matrosov prison, which is located in Tbilisi’s southern Krtsanisi district and used for high profile detainees.

Father Giorgi Mamaladze, who holds several high posts in the Patriarchate, the ruling body of the Georgian Orthodox Church, was arrested as he was trying to board a plane for Berlin with his luggage stashed with poison on February 10.

Since then, he has not given testimony to the investigators, but insists that he innocent.

Mamaladze’s lawyers said he would give testimony on Tuesday, but the interrogation failed, allegedly due to deteriorating health. However, prosecutors said Mamaladze was merely avoiding answering ‘critical’ questions.

The case is still shrouded in mystery as the Prosecutor General’s Office is reluctant to issue important evidence, including secretly obtained video and audio recordings.

This evidence was showed to members of the Synod, the Georgian Orthodox Church’s supreme authority, consisting of metropolitans and bishops. After that, clergy have generally refrained from commenting on the case.

Metroplitan of Chkondidi, meupe Petre Tsaava is the only exception. He insisted that Father Giorgi Mamaladze is a victim of intrigues inside the Patriarchate and pointed the finger at Shorena Tetruashvhili, the patriarch’s secretary, as a possible mastermind.

Tetruashvili has been speculated to have been the target of the poisoning attempt.