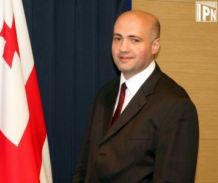 Finance minister Dimitry Gvindadze explained what the emergency funds have been spent on. The government has had to rearrange this year's budget to finance rescue work after a storm. (IPN.)

TBILISI, DFWatch – “Everything which is not secret, is public”. This is how the Georgian finance minister answers the opposition, who demand to know what the reserve funds have been spent on.

The two reserve funds, one controlled by the government and the other by the president, are meant to be used for handling emergencies like natural disasters, and contain about USD 31 million each.

But the government recently said it would rearrange the state budget in order to free money for compensation and cleanup work after the storm on July 19.

This raised the question, where has the money in the reserve funds gone?

On Monday, the parliament faction Unity for Justice, which is seen as supporting opposition billionaire Bidzina Ivanishvili, demanded to have it made public how the reserve funds have been spent. This question was asked on Tuesday at a faction session in parliament, where the deputy finance minister introduced the budget bill.

There was no immediate answer to Unity of Justice’ question, and meanwhile a protest was held outside the parliament building by the youth wing of the Georgian Dream coalition with the same demand.

But Finance Minister Dimitry Gvindadze at Wednesday’s plenary session presented a list showing which events have been financed by the reserve funds.

The list included the 20 year anniversary of diplomatic relations being established between Georgia and USA; an award ceremony for the national rugby team; various infrastructure projects, water supply, and roads in the regions; restoration of a church in Tbilisi; measures against cases of anthrax and against pests; marketing of Georgian agriculture abroad; awards to winners in various sports disciplines; the under-17 football team’s participation in the UEFA championship; support for for political parties in the election year; EU and Euro Atlantic integration events; and for international advocacy.

The minister didn’t specify the amount of money spent on each event.

“Everything that is not secret is public,” he said, adding that it is unclear to him why the opposition is politicizing this issue. Gvindadze called on the opposition not to use fiscal policy to score political points.