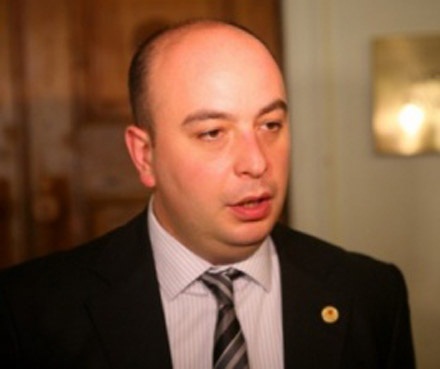 Lasha Tordia was a high-ranking member of parliament for the governing party until Wednesday, but says he will be objective in his new job overseeing party financing regulations which have been forcefully applied against an opposition movement. (IPN.)

TBILISI, DFWatch – A former high-ranking member of parliament who was appointed new head of the audit service promises that he will be fair, independent, professional and objective.

Lasha Tordia was appointed to the position after the former head, Levan Bezhashvili, left on Monday, saying he wants to help people affected by a storm in the Kakheti region. President Saakashvili yesterday put him in charge of the cleanup work.

The new head of the audit agency says he wants to hold consultations with political parties in order to prevent law violations and avoid the use of coercive measures which that would necessitate.

Before taking over the agency, Tordia was a high ranking member of parliament, and in charge of the human rights committe, representing the ruling National Movement party of President Mikheil Saakashvili.

But although involved in the daily wranglings in parliament until Wednesday, when parliament approved him, Tordia vowed that from now on he will end all political activity and conduct his new job “based on objectivity, independence, fairness and professionalism”.

“Let’s work on a plan,” Tordia said, adding that he doesn’t plan staff changes at the audit service.

The State Audit Service, previously known as the Chamber of Control, has conducted a series of investigations into violations of new tough rules on party financing. The agency is accused by some of having a pro-government bias.