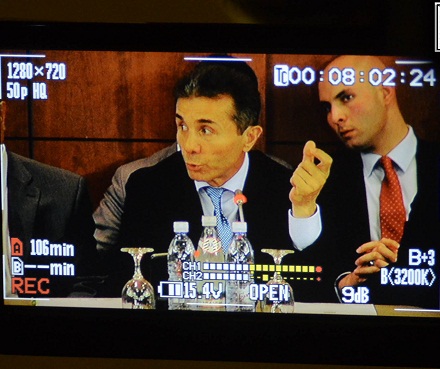 Election winner Bidzina Ivanishvili met local and foreign business leaders shortly after the election to gage the situation in the private sector. (IPN.)

TBILISI, DFWatch — Following the opposition victory in last week’s parliamentary election, people who have been deprived of their companies in recent years are now saying they want to get back what was taken from them during the rule of President Mikheil Saakashvili.

Former owners of Georgian companies have published complaints and statements about being deprived of their property by government officials and that they plan to get back their assets.

The erstwhile owners of Tbilisi Power Wagon Repair plant today told media that they plan to go to court in order to get back the plant.

Avtandil Sakvarelidze and Mirian Dekanoidze, who used to be general director of the company accuse Davit Kezerashvili, former Defense Minister, Gela Bezhuashvili, Head of Georgia’s Intelligence Service and Irakli Ezugbaia, head of Georgian Railway of having appropriates their property shortly after Russian-Georgian war in August of 2008.

They accuse several other persons of being involved in this process including a businessman, a notary, a head of local police and ‘about twenty masked butchers’ who attended a late night document signing session one month after the war, in September 2008.

The former owners explain that afterwards they had to leave Georgia. Dekanoidze says he and his family have political asylum in the U.S., while Avtandil Sakvarelidze, who clams all his property in Georgia was seized, now has political asylum in Austria.

They will start a court case using a number of documents, audio and video clips to prove the guilt of those they accuse of unlawfully seizing their businesses.

A notary accused in the letter complained against the statement, saying that the accusations are groundless and threatens his work; that they are disrespectful and damages his professional reputation.

Shortly after the parliamentary election on October 1, founders of pro-government Rustavi 2 television released a similar type of letter, which said that their property had been illegally deprived by officials and they plan to reclaim it.

Levan Karamanashvili owned those shares before the deal.

But just a few days after the deal, Kezerashvili sold his recently purchased property to Gia Karamanashvili, a person close to current president Mikheil Saakashvili and a relative of Levan Karamanashvili, for the same price, 750 000 lari, leaving him with no profit from the deal.

In his speeches, the president has mentioned Gia Karamanashvili as a friend.

Nonetheless, Saakashvili’s government has for years claimed it has a liberal policy offering favorable conditions for business in the country.

DF Watch has a number of times reported about private property and business being deprived by authorities.

A week ago, the leader of election winner Georgian Dream met with business leaders in Georgia to familiarize himself with the situation for local business. He called on them to refuse being part of monopolies and say no to cartel agreements, as it jeopardizes the free market economy in the country.

Bidzina Ivanishvili promised to set up an anti-monopoly service. Georgia had such an agency earlier, until the government dissolved it because of corruption.