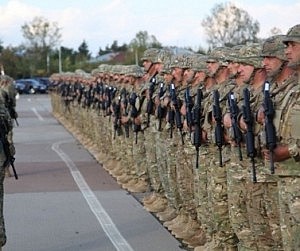 TBILISI, DFWatch–It is still unknown if a decision by the former Georgian defense minister to end compulsory military service will become a reality.

A decision may be expected in November, because Defense Minister Levan Izoria promised to ‘clarify’ the issue by next month, following a discussion within the ministry about a government strategy, to take place in October.

“Next week, we planned a large session of the commission which is considering this issue. Meetings will be held with experts and the non-governmental sector. In the beginning of November, we will present a report from 100 days of work, as well as certain future plans, which will include compulsory army service,” Izoria said.

On June 27, a few days prior to getting involved in the election campaign with the Republican Party, Former Defense Minister Tina Khidasheli signed a decree abolishing compulsory military service.

The decree only concerned the Defense Ministry, meaning that Interior Ministry and Prison Ministry, which together account for 75% of draftees, would still be able to draft young Georgians.

The ruling GD party criticized Khidasheli’s decision, with Irakli Sesiashvili, head of the defense and security committee in parliament, saying that it was ‘shortsighted political PR’. Sesiashvili argues that ending compulsory military service is not a decision which may be taken by the defense minister.

Both the prime minister and the president expressed surprise at her decision. The PM said that such a decision needs approval by the government as well as the National Security Council.

The president agreed with this.

“No matter if I agree or disagree with this decision, it should not be done by a single official, but has to be considered at a government session and by the Security Council,” Margvelashvili said.