One soldier dies as truck overturns in Georgia

One soldier dies as truck overturns in Georgia 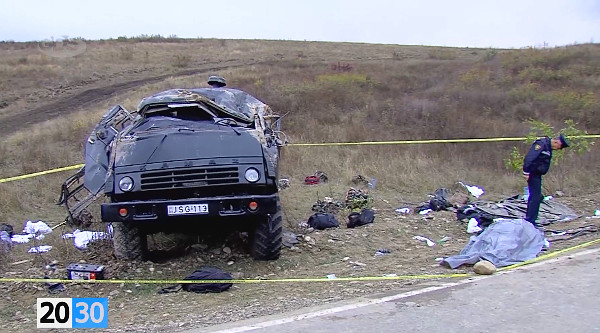 TBILISI, DFWatch–One soldier died as a military truck overturned on a highway in Georgia’s eastern Kakheti region on Friday.

The other 36 soldiers who were in the same vehicle received only lighter injures. 27 of them were first brought to a hospital in Dedoplistskaro, while eight were taken to Tsnori.

None of them have life-threatening injuries, doctors said.

Later, eight who had more severe injuries were moved to hospitals in Tbilisi. The condition of four of them is serious, but stable.

The rest of the soldiers will continue to receive treatment at the military hospital in Gori, the Defense Ministry said.

The accident happened near the village Bodbe, according to Nika Janiashivli, head of Dedoplistskaro municipality. The reason for the accident is unknown at this stage.

Ministry of Internal Affairs (MIA) launched an investigation on the basis of the fifth passage of article 276 of the Criminal Code about violation of traffic safety rules or regulations concerning commercial exploitation, resulting in death.

The Ministry of Defense said in its account later on Friday that there were 37 soldiers in the truck, which was of the brand Kamaz and was travelling from Dedoplistkaro to the village Osiauri.

The soldiers hospitalized in Tbilisi were visited by representatives of the president’s administration, the defense minister and the health minister.

President Giorgi Margvelashvili sent his condolences to the family of the deceased soldier and also expressed his wishes to the rest of the soldiers that they will get well soon.