Dead fish found on shores of recreational lake near Tbilisi

Dead fish found on shores of recreational lake near Tbilisi 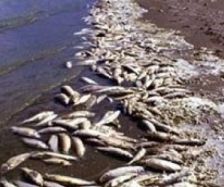 TBILISI, DFWatch–A large number of dead fish has been discovered on the shores of Kumisi Lake.

Specialists at the National Food Agency claim the fish died due to a lack of water and oxygen.

Kumisi Lake is a popular place for anglers and lies about 20 km south of Tbilisi.

Specialists studied the situation in the lake and found that the fish did not die due to disease or poisoning, but lack of oxygen, the National Food Agency explained to Interpressnews.

According to Wikipedia, oxygen depletion is the most common cause of mass fish die-off. The level of oxygen dissolved in the water fluctuates over the course of a day due to factors such as weather, temperature, sunlight and the amount of living and dead plant and animal matter in the water.

The agency says an entrepreneur built a fish farm on the lake and managed to sell his fish before it died. The fish which was found dead was collected and buried with the attendance of agency representatives.

National agency representatives assure that the dead fish won’t make it to shops and markets, but it is not excluded that the local population may sell the dead fish.

A study of microbial levels, published in Journal of Water and Health in 2013, found that Kumisi Lake, a brackish body of water in an active agricultural area, had a high level of fecal indicators.

An illegal slaughterhouse was discovered in Kumisi earlier this year.