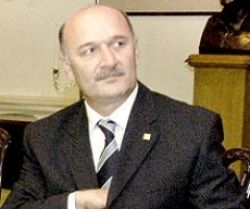 TBILISI, DFWatch–The family of a deceased diplomat claims that he did not die from natural causes.

Levan Mikeladze was Georgian Ambassador to Switzerland. He died on April 26, 2009; officially from a heart attack.

Mikeladze resigned in protest after President Saakashvili brutally dispersed a peaceful demonstration in Tbilisi in November 2007, which led to a state of emergency and snap elections.

“The decision to use force in order to disperse a peaceful rally was a huge disappointment for me, on the background that Georgia chose democracy and building free country as a goal,” he said when he resigned.

On Wednesday, Maestro TV reported that his family suspects he was killed, as his brother was denied conducting an independent autopsy. He said a stranger had visited Mikeladze before his death.

Mamuka Mikeladze explains that the family wanted to send samples from the body in order to conduct an independent analysis in the US, but they didn’t get samples from the National Forensic Bureau.

“Investigators never asked how this man was feeling – good or bad. Such an omission is unimaginable,” Mamuka Mikeladze told Maestro.

Their lawyer Shalva Shavgulidze thinks it is suspicious that Mikeladze died after a stranger visited him. He also remembers that when Levan went to Switzerland to bring his family to Georgia, his apartment was broken into.

“This was more like imitation of a robbery. Two persons participated in it.”

The lawyer claims that investigators didn’t take this into account and a number of other incidents which took place before prior to Mikeladze’s death.

Shavgulidze cannot say how Mikeladze might have died but thinks it is possible to investigate it. He suspects that it wasn’t beneficial for the previous government for Mikeladze to get involved in politics.