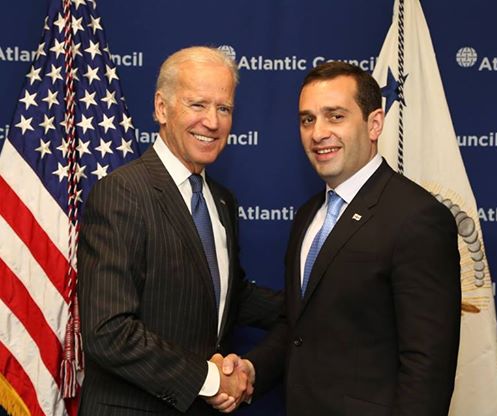 He made the call in a speech at the Atlantic Council, a Washington-based think tank, on Wednesday.

“Now the West has to seize the opportunity as my colleague was saying to create the reality on the ground by accepting the membership of aspirant countries to NATO by putting some defensive, purely defensive assets in the aspirant countries and predominantly in Georgia,” Alasania said.

“Air defense capabilities, this is something we need to put in Georgia, and Russia will understand that you are serious, and some other actions that will be discussing bilaterally with the United States while I am here.”

He also spoke about the challenges of Ukraine and Russian policy. He said Russia always creates a new reality and it may choose a new target and start negotiations with the West only after this.

While at the Atlantic Council, the Georgian defense minister met US Vice President Joe Biden.

The two discussed current events in Ukraine and Russian policy in the region, according to the Georgian Defense Ministry’s press office.

Alasania thanked Biden for supporting Georgia’s sovereignty and NATO aspirations. He underlined that NATO should establish a Membership Action Plan (MAP) for Georgia and asked that the US support Georgia in this regard.

Another topic at the meeting was US-Georgia bilateral cooperation. The vice president underlined the essential progress Georgia has achieved in defense reform.

Within the frames of his visit to the US, Alasania also met the president of the German Marshall Fund in the US, Karen Donfried. He informed her of the reforms carried out in Georgia and discussed the prospects of Georgia becoming a NATO member.

Alasania visited the US Institute of Peace (USIP) in Washington and met with its chairman, Stephen Hadley. He also met with Mark Green, President of the International Republican Institute (IRI).

“I think Georgia is a great success story. There is a way to go as the reason our country toward being a full success for democracy. But I think Georgia has made tremendous progress. IRI is proud of its partnership with the government of Georgia and looks forward to work more closely in the month/ years ahead,” Mark Green said.

The Georgian defense minister also held an address at the conference Europe Whole and Free, organized by the Atlantic Council. He focused on Georgia’s expectations for the upcoming NATO summit, as it has conducted defense reforms, and Georgian soldiers are participating in NATO-led operations.

“We are not just a partner. We are actually contributing more than some other NATO countries in Afghanistan, fighting shoulder-to-shoulder with your guys,” he said, adding that a response should come from NATO at the summit.