Day of remembrance for transgender people observed in Tbilisi

Day of remembrance for transgender people observed in Tbilisi 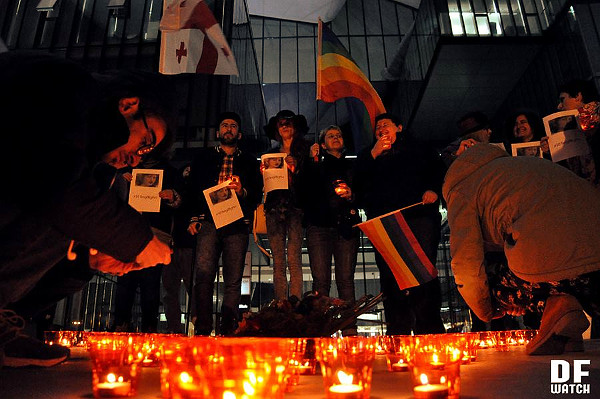 A day of rememberance was held one year after the brutal murder of Sabi Beriani in Tbilisi. (DF Watch.)

TBILISI, DFWatch–Two dozen activists gathered in Tbilisi Tuesday evening to observe a new national day of remembrance for transgender people, exactly one year after the murder of a transgender woman.

The memorial event was held to remember the murder of the young transgender woman Sabi Beriani on 10 November 2014, and declare the day of her death a national day of remembrance of transgender people who have been subject to violence.

Beriani was stabbed to death and her flat set on fire, but the murder suspect was acquitted by Tbilisi City Court in August. The court found him not guilty in having murdered Beriani, but guilty of having beaten another transgender woman the same evening.

Georgian groups working to defend the rights of lesbians, gays and other sexual minorities criticised the verdict.

In front of the House of Justice, the activists arranged red candles in the shape of a transgender symbol and laid down a wreath. Some waved rainbow flags, a transgender pride flag, and a Georgian flag, while others held pictures of Sabi Beriani and candles in their hands. Finally, the activists released lanterns from a footbridge in front of the building.

Security personnel at the House of Justice tried to disrupt the gathering, but following the arrival of a police patrol, the gathering continued without disruptions.

In May, the Public Defender criticized the current obstacles to changing legal gender in personal identity documents, which are issued at the House of Justice. Beka Gabadadze, one of the organisers, told DFWatch that the choice of venue was not arbitrary.

“One of the elements of oppression of transgender people is connected to the state policy of non-recognition of their gender. This place is symbolic, as it issues documents. Our protest is connected to the fact that gender recognition is very difficult in Georgia. We demand that the state takes it into account based on the world’s best practice in treating gender dysphoria.”