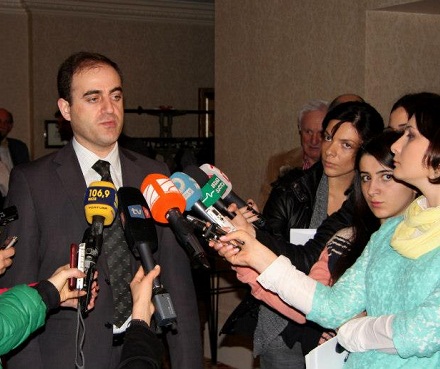 TBILISI, DFWatch–The Georgian Dream coalition has chosen Davit Narmania, Minister of Infrastructure and Regional Development, as its candidate for mayor of Tbilisi.

Narmania is thought to be one of the best ministers in the new government. The decision was made by the coalition’s political council on Friday and announced on Saturday.

Former Prime Minister Bidzina Ivanishvili who recently resigned said before leaving that he would introduce his own view to Georgian Dream about the candidate for Tbilisi Mayor before he would leave.

Davit Narmania said he is ready to participate in the election and thanked the Georgian Dream coalition for the trust.

Narmania said it will be a challenge for him to be mayor of a capital that is ‘full of problems’, but that it is also an honor for him.

“I will confront 41 problems with 41 goals,” he said at a briefing at the Ministry of Regional Development.

Narmania has a PhD in economy and is a full professor at Tbilisi State University. He was appointed to the post as regional development minister in October 2012. It is unknown who will replace him as minister.