Damon Wilson: The victory makes GD fully responsible for where Georgia comes out

Damon Wilson: The victory makes GD fully responsible for where Georgia comes out 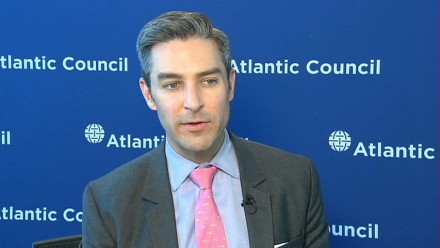 Damon Wilson is an American foreign policy advisor and the current executive vice president at the Atlantic Council of the United States, a foreign and public policy think tank based in Washington, D.C.

VoA: Couple weeks ago Georgians cast ballots for local government. Overall, the process was assessed as democratic, what are your assessments?

Damon Wilson: What I have seen is a healthy normalization of electoral cycles in Georgia across the board. Georgians are used to going to the polls, used to casting their ballots, used to having their voices heard, and while that is such a simple statement, it’s not something you can take for granted in this region.

It’s also clear that this was a pretty big victory for the ruling party, Georgian Dream, and consolidating their hold on local municipalities and really speaks to continuing uncertainty of what’s the force, what are the voices to challenge Georgian Dream going forward as various opposition parties jockey for that lead role. The dust hasn’t quite settled on who finds what.

VoA: With these elections Georgian Dream government further consolidated power, which as National Democratic Institute (NDI) described in its assessment, puts prospects for vibrant and pluralistic democracy at risk.

Damon Wilson: The victory gives Georgian Dream both a strong mandate to move forward with its policies and it also means that the GD is responsible for where Georgia comes out. It’s fully accountable for the process.

I think also in a transitional democracy, like Georgia, it is important to reassure that the voice of the minority is heard in the political process, whether that tend to break down as ethnic groups, disadvantaged socio-economic groups, or minority political voices that still have a seat at the table.

VoA: In a broad broader context of a growing debate, a concern about one-party dominance and threats to political pluralism, what is the importance of local elections?

Damon Wilson: Local elections are significant as they take temperature of the pulse of where people want leaders that are closest to them, to be. These are people that tend to have interactions on a more routine basis with their constituents.  The health of local governments and how they respond is quite important for the functioning of any credible, real, and genuine democracy.

It is very common in a lot of societies, that have gone through a transition into their democracies, that there does seem to be a sense of consolidating, people moving towards where the power-center is and that cascading down into local elections. We saw this even in the early days of the dramatic flip from overwhelming support from UMN to all of a sudden GD and overwhelming support for GD, which represented consolidation of local power-brokers moving toward where the decision making authority is.

VoA: Looking at the pre-election process, one would see disproportion of resources in GD’s favor, which secured over 90% of party donations.  Opposition parties also had unequal access to media.  How, in your opinion, does that reflect on pluralism in politics?

Damon Wilson: This is an obvious challenge that exists in a lot of markets, particularly what you would consider small media markets or smaller countries. Whether it is advertising revenue for media outlets or political party foundations, it can be often very, very difficult to find the pluralistic financial support that helps keep a healthy, open, democratic society in debate.

These things always play out in a pretty rambunctious way in many democratic societies, but you want them to play out within the context of a certain set of rules, a certain set of expectations, that give people a shot.

VoA: The United National Movement (UNM) refused to participate in the runoffs in two towns. What’s your take on that?

Damon Wilson: I’m always an advocate for being in the arena. I’m highly skeptical of parties in functioning democracies that boycott parliaments and elections. Georgia’s got oxygen for its democratic processes and we’ve been watching an imperfect process evolve over twenty-five years. I’m a strong believer of seeing folks in that arena, I think it’s healthy to compete and I would prefer to see UNM compete in the runoffs that they’ve made it into.

VoA: Aleksandre Elisashvili, a politically unknown independent candidate ranked second in Tbilisi. What does that say about Georgian political parties and their credibility among voters?

Damon Wilson: We’re facing a bit of a populist revolt throughout our democracies globally, right now. Part of the spasm that we’re going through globally, part of it is a reflection of the impact of globalization in our many societies. It’s taking very many forms.  If you look at the American election, you see the surprise victory of Donald Trump, the first populist to run as such and to win the White House and our history, where we have a strong history of populism. You’ve seen this play out in a very different way in France where center-right, center-left, traditional parties vanished as Emanuel Macron, a very centrist and yet non-traditional candidate rode to victory.

On one hand, this is what happens in democracies.  It’s healthy to have a population that is skeptical of its political leaders that can provide a break, can provide checks and balances on power. What I’m worried about is that skepticism, coming into deep, deep cynicism, about the process not actually being able to deliver results. So to see an independent candidate do well is not a bad sign.

In many respects Georgian Dream is very broad, diverse. It’s pretty hard sometimes to define exactly where it is in an ideological sense and that shows in some respects that they’ve played to their strength. We’re watching the convulsions of trying to figure out the right political outlay. You do have to say that a win in the first round of fifty percent of the votes is an endorsement, it is a testament to new mayor Kaladze, who demonstrated that he can generate votes and is a popular figure in the country.