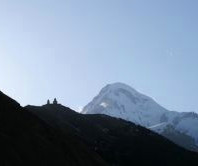 TBILISI, DFWatch–A Czech climber died on Mount Kazbegi, one of the major peaks of the Caucasus Mountain Range, in the northern part of Georgia on July 30.

According to the Emergency Service, the girl fell down and suffered severe head trauma.

Rescue workers brought her to Tbilisi, but she died on the way to the hospital.

The deceased was on a climbing trip with another girl, the service said. The other climber is still in Kazbegi.

The body was brought to Samkharauli National Forensic Bureau for an autopsy.

An investigation has been launched pursuant to article 116 of the Criminal Code about death due to negligence.