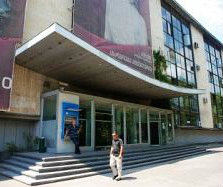 TBILISI, DFWatch–Georgia’s Constitutional Court has decided that the Public Broadcaster cannot fire members of its board before the end of their term.

Meanwhile, parliament has still not selected new board members, a process which has been dragged out over the last few months due to political wrangling.

The case arose because Davit Kandelaki, Natalia Dvali, Zurab Davitashvili, Emzar Goguadze, Giorgi Melandze and Mamuka Pachuashvili, all dismissed members of the GPB board, sued parliament for passing an amendment to the law about broadcasting. The amendment granted parliament the right to suspend board members before their term is ended.

A representative of parliament explained at Friday’s hearing that the goal of the amendment was to increase the effectiveness and accountability of the board. The old system for selecting a GPB board was inadequate, he said and it was necessary to dismiss the board before the term was over.

But he also said it is not possible to merge current members of the board with recently elected board members.

Explains its decision, the Constitutional Court writes that it is the authority of parliament to reform management circle of GPB, including rules for how to staff the board, but it is necessary to conduct this process without violating people’s constitutional rights.

According to the court, independence is indefinite element of the substance of the board; that is why dismissing the board is only acceptable in special cases, for example when the current board endangers the independence, effective work and further development of GPB.

Reform of the function of important official body cannot be a reason to dismiss officials. Thus the Constitutional Court of Georgia abolished the part of the amendment passed by the parliament about dismissing the current board of GPB and electing a new one.

The new amendment about staffing the GPB board came into force on November 25, 2013. The amendment changed the rules for how to staff the board, but also the number of board members; there will now be nine members instead of fifteen.

A competition for selecting new members was announced on November 27. Three members should have been selected by the majority in parliament, three by parliamentary opposition, two by the Public Defender and one proposed by the autonomous republic of Adjara.

However, parliament failed several times to staff the board and selected only four new members.

The process to select five other members was just underway, as a special commission sent a list of candidates for parliament to review.

The term for the previous members of board of GPB was to have ended in 2015 and in 2017 for three of its members.