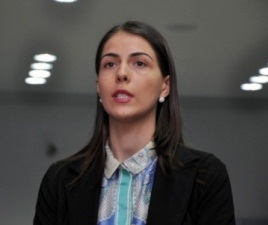 Eka Azarashvili, spokesperson for the Central Election Commission, asks the media not to jump to conclusions while complaints about alleged fraud are still being looked into. (IPN.)

TBILISI, DFWatch — Four days after the election, the Central Election Commission (CEC) said the counting of votes had been completed and announced the final results.

CEC spokesperson Eka Azarashvili said as she presented the results that there are some remaining procedures required by law for her colleagues to go through.

Currently there are complaints under review. Election results were annulled in one precinct in each of the eight districts in Sagarejo, Marneuli, Tetritskharo, Kaspi, Gori, Akhaltsikhe, Martvili and Khulo.

The situation was tense in Khashuri district on Election Day and the following days, as special units of the police broke into several precincts and – according to claims from non-governmental organizations — there was conducted fraud. Observers and non-government organizations demanded to abolish the results from several precincts in this region.

Eka Azarashvili said the complaint about Khashuri has been referred to the prosecutor. She called on interested parties and the media to avoid making preliminary conclusions and discrediting the election administration while there is ongoing process of reviewing complaints.