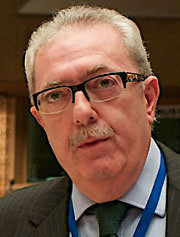 The new report is written by Pedro Agramunt from the Spanish People’s Party, and published by the Council of Europe’s (CoE) parliamentary assembly. It claims that the Georgian government is using law-enforcement in order to ‘harass and weaken the opposition’.

The Constitutional Court recently decided in connection with a case against former Tbilisi mayor Gigi Ugulava that the nine months maximum term for pre-trial detention cannot be circumvented by adding new charges to a person, which has been routine practice until now.

Ugulava’s case is mentioned by Agramunt along with the cases against former Interior Minister Vano Merabishvili and former Justice Minister Zurab Adeishvili, as examples that there is ‘an astonishing number of individual examples of selective and presumably abusive use of pre-trial detention against political opponents’.

Ugulava was set free after the Constitutional Court ruling, but the next day sentenced to four and a half years for misusing public funds to finance the National Movement’s election campaign in 2012.

Merabishvili is serving a four and a half years prison sentence for ordering the violent dispersal of a peaceful anti-government protest in May 2011, and later another three year sentence for the murder of Girgvliani. Adeishvili is abroad, wanted for torture of prisoners, beating opposition demonstrators, and taking a TV station off the air in November 2007.

The CoE parliamentary assembly has also previously expressed concern that the high profile trials are a form of retribution, and the latest ombudsman’s report about human rights, covering the year 2014, says many trials against former officials bear signs of being politically motivated.

“[The National Movement] had planned to scale down their “zero tolerance” policy in due course, after it had produced the desired effect of making Georgia safer from crime,” Agramunt writes.

But the numbers stayed high and at one point toward the end of Saakashvili’s presidency, Georgia surpassed Russia in per capita incarceration rate, reaching number one among European countries. It was only after the Georgian Dream coalition came into power that imprisonment numbers went drastically down, due to an amnesty that released over half of all prisoners. In 2013, the incarceration rate was down to 28 per 100,000 persons.

The imprisonment rate increased again in 2014. Agramunt writes that according to officials, this may be explained by the fact that after the 2012 amnesty, a number of released prisoners committed new crimes, in particular drug-related crimes, which exposed them to pre-trial detention in order to prevent new crimes.