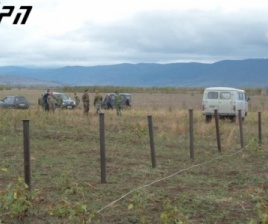 TBILISI, DFWatch–Ossetians ask locals in the village Dvani to empty their storage rooms, which they claim are on South Ossetian territory.

“Ossetian villager came to us yesterday afternoon, called us and required to empty storage rooms in two days, because the border will be moved and we wouldn’t be able to take anything. So we do it, what else can we do?” Interpressnews quotes Zaal Akhalkatsi, a local from Dvani village saying.

Akhalkatsi says that there are several houses at the de facto border, which were burned out during the war in 2008, but their owners take care of them and use them for storage. Now they will have to empty those houses.

There are three such houses. Their owners have started to empty them as they were given only one day to do this and must be finished Wednesday evening.

Locals claim that Russian soldiers are continuing to install wire fences. Now there is a new threat that the church and the village school may also end up on the other side of the demarcation line.

Zaza Kopadze, trustee of the village Dvani, apologized for reporting incorrect information about Russians moving the border 600 meters, information which was not confirmed by the Interior Ministry either.

Representatives of the agriculture minister, who arrived to the spot, say that they are now studying what losses have been suffered by locals, so the government and the ministry may compensate them, but it is at the moment unknown how this will be done; whether by financial compensation or that villagers may be given new land.