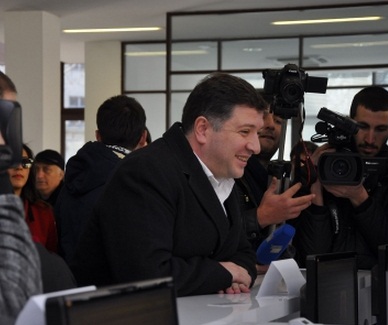 TBILISI, DFWatch–In Georgia, the National Movement is crying foul over the trial against one of their top people, suspended Tbilisi Mayor Gigi Ugulava.

The reason is that the prime minister recently announced a ‘moratorium’ on prosecuting any member of the National Movement until after the local elections June 15. The decision has now led to a quarrel, stemming from a lack of clarity about what this highly unusual decision actually means.

Ugulava is to stand trial for embezzlement of 48.2 million lari (USD 30 million) ahead of the parliamentary election in 2012. If convicted he may be jailed from seven to eleven years.

The then mayer is accused along with Giorgi Sabanadze, the head of Tbilisi Development Fund, which is owned by the City of Tbilisi and carries out various renovation work of parks and other city assets. Prosecutors claim the embezzled money was instead spent on the National Movement’s election campaign.

At that time, the National Movement was all-powerful in Georgia and controlled almost every aspect of society, but it lost the parliamentary election and quickly found itself target of a wide-ranging effort to prosecute people like Ugulava for different kinds of misuse of power.

The party began appealing to Western leaders that this was politicized justice, and found some support for this view, especially in the European People’s Party, the EU’s largest political bloc. It was apparently pressure from Western countries which led to the surprising announcement by Prime Minister Irakli Gharibashvili last weekend of a ‘moratorium’ on prosecuting National Movement members.

The announcement is surprising, as in it, he stated that Georgian law enforcement is violating the democratic rights to engage in politics when prosecuting former officials, a view the ruling Georgian Dream coalition has always distanced itself from until now. Their speaker of parliament said less than two months ago that police and prosecutors can’t take a vacation just because there is an election coming up.

Ugulava is disputing the charges and refuses to accept his suspension as mayor until the case has been settled. On Monday, he also demanded that the whole case is postponed until after the local election on June 15, citing the moratorium.

The problem is whose decision it is to postpone the case. In a direct sense, it’s up to the judge to make that decision, but if the moratorium is to binding for the judge, it would undermine the independence of the judiciary; one of the cornerstones of any real democracy. What Ugulava expects rather is that the prosecutor in the case demands a postponement, which the prosecutor refuses, since the trial was scheduled before the announcement of the moratorium.

The National Movement however, claims that the timing of the announcement and the letter summoning Ugulava to court was deliberate, to not let the ex-mayor off the hook before the people who elected him in 2010 go the polls again to find his successor.

The prosecutor says Ugulava’s appeals to be included in the moratorium is an attempt to delay the case.

Also on Monday, the prosecutor presented a recording of a phone call between Ugulava and his younger child, which the judge ruled as inadmissible, arguing that it was obtained in violation of the European Convention on Human Rights.