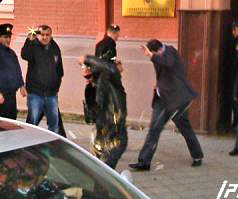 TBILISI, DFWatch–Georgia’s minister of justice calls on everyone to allow political parties to conduct their election campaign in a normal environment, after eggs were thrown at National Movement activists last weekend.

Ugulava was pelted with eggs on Friday as he left the Constitutional Court, where supporters and opponents were waiting for him to attend a hearing.

Inside, the Constitutional Court was considering whether it was right to suspend Ugulava as mayor in connection with a corruption trial against him. Outside, his supporters and people opposed to him argued loudly. Protesters threw eggs at a car belonging to UNM members. Police had to escort Ugulava to his car.

Two people were charged with hooliganism, an administrative violation, and fined 100 lari (USD 60).

Tsulukiani chairs the inter-agency commission, which is created in order to ensure a competitive and free election environment and look into violations.

She said in the statement that it is important that every candidate in the upcoming election is able to compete in a peaceful environment.

“I say to the so-called egg-throwers that it will be better for our country’s welfare if we build a Georgia where Sunday, Election Day, is a celebration, but it also must be just another banal day for citizens in a good mood, when a person goes after dinner or supper to vote and votes for the desired candidate.”

She said all the people and groups who come and throw eggs must understand that there is a state with a democratic future between opposition and ruling party, between people with different opinions.

“So when we throw an egg at someone, it hits our better future in the face,” she said, continuing that it isn’t worth it.

The local elections will be held on June 15.