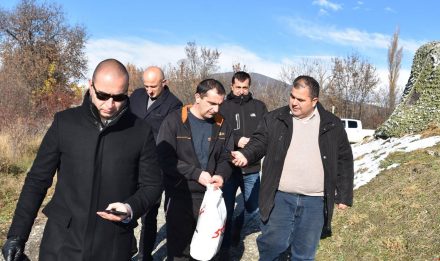 Upon his release, Giorgi Giunashvili (center) was met by Georgian representatives at the defunct Ergneti checkpoint. (Facebook.)

TBILISI, DFWatch–At the 42nd round of the Geneva talks, 12-13 December, Abkhazia will probably demand that Tbilisi must release an Abkhazian militant from a Georgian prison, and in return, Giorgi Giunashvili will be released from a Tskhinvali prison.

Giunashvili was detained by the Tskhinvali regime on charges of “terrorist activities”, and released on November 26 after 18 months’ imprisonment.

The same day, the Tskhinvali-based news agency nykhaz.ru and the Russian media company Sputnik reported that South Ossetia’s de facto president Anatoly Bibilov conveyed the request by his Abkhaz counterpart Raul Khajimba to the local security council to hand convict Giorgi Giunashvili over to the Abkhazian side in order to exchange him for an Abkhazian prisoner held in a Georgian prison. The identity of the latter person wasn’t released.

Official Tbilisi denies holding any negotiations about these matters.

Giorgi Giunashvili is not aware of what circumstances he has been released. Says that the representative of Tskhinvali regime Murad Jioev and Zurab Lakerbaia from Abkhazia met him at the prison gates and handed him over to the Georgian side.

“I woke up in the morning and they took me out. I was told I’d be released. Then I met a representative of Abkhazia, Lakerbaia. He told me that I was released on request of the Abkhaz side. I do not know why and how,” Giunashvili said.

Murad Jioev, spokesman for Tskhinvali at the Incident Prevention and Response Mechanism, says that after this exchange “the fate of the Abkhaz prisoner depends on the negotiations between the representatives of Abkhazia and Georgia.”

In March 2016, 14 Georgians were released from prison by Sokhumi. In return, four Ossetian prisoners were freed, who were sentenced to life imprisonment in Georgia and were handed over to Tskhinvali de facto authorities.

Consequently, it is likely that next time the two sides meet, in Geneva December 12-13, the Abkhaz side will request the release of an Abkhaz militant held in a Georgian prison.

The 39-year-old Giunashvili is a resident of the village of Disevi, which is across the conflict line inside the territory controlled by Tskhinvali. The village was burnt down in the 2008 Russo-Georgian war. Giunashvili was living with a Tskhinvali spouse and two young children in the refugee settlement in the village Berbuki.

He was detained last June upon visiting his home village. At first, he was indicted by Tskhinvali for “illegal crossing of the state border” but later his was found guilty of “terrorism” and sentenced to a 20 years prison term.

Tskhinvali accuses him of being a member of an armed village defense group which operated under the auspices of Georgian intelligence.