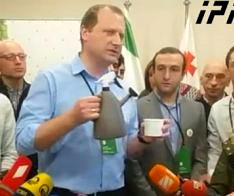 TBILISI, DFWatch–Leaders of a small libertarian party in the former Soviet republic Georgia ask authorities to hold them to account after a marijuana planting stunt four days ago meant to force a softening of the country’s drug policy.

So far, the activists have not been approached by law enforcement officers for violating Georgia’s strict drug law, even though 81 cannabis plants are growing in paper cups in the party’s headquarters, according to Zurab Japaridze, leader of the new party called Girchi.

Girchi’s public weed planting event on New Year’s Eve was done in order to raise awareness about the country’s harsh drug policies. The next day, police stated that an investigation was underway about offenses that are punishable by up to 12 years in prison under the Georgian criminal code.

Japaridze considers Girchi’s December 31 action a milestone on the way toward softening the country’s drug policies and a step forward toward improving the human rights situation in the South Caucasus nation.

“We don’t know how the government will react, but this has already been a victory for us. What we did was a political act of civil disobedience so that the government should make a political decision to either soften its drug policy and make the country more civilized regarding that, or act according to the law and arrest us,” Japaridze said.

He named three possible scenario that can develop following the weed planting. There could be a liberalization of the drug policy and the campaign would end with victory. Another scenario is that members of the party are arrested, but this would speed up the process of decriminalizing drug use. The third option is that the police don’t arrest them; in which case they can’t detain others for the use and cultivation of weeds.

Under Georgia’s Criminal Code, it is illegal to purchase or keep a small amount of marijuana or its analogy or precursor for personal use or use without a doctor’s prescription. Violating the ban is punishable by a fine, or 120 to 180 hours of community labor, or imprisonment for one year.

However, the consumption of marijuana, which grows in the wild in many parts of Georgia, was not considered a criminal offense until 2006, when president Mikheil Saakashvili launched an anti-drug campaign. Between 2008 and 2013, thousands of Georgians were detained and forced to undergo drug tests.