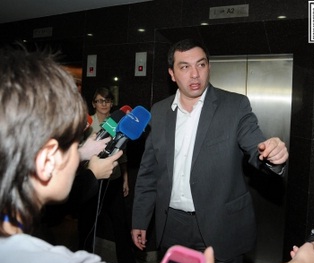 Giga Bokeria claims he was called in for questioning for political reasons. (Interpressnews.)

TBILISI, DFWatch–Prosecutors in Georgia Friday questioned the former secretary of the country’s Security Council in an embezzlement case.

Walking out after five hours inside the Prosecutor’s Office, Giga Bokeria said the interrogation was conducted in a peaceful fashion, but before going in he thought he might be detained in the end.

Bokeria has background from Liberty Institute, one of the non-governmental organizations (NGOs) that brought about the peaceful coup known as the Rose Revolution in 2003.

Afterward, he became a member of parliament, later deputy foreign minister and then was appointed as secretary of Georgia’s National Security Council.

Bokeria has a lot of influence in the National Movement party, although not an official member for some years, only joining the party at the congress in fall of 2013.

He is considered the only person able to persuade then President Mikheil Saakashvili.

After the Georgian Dream coalition won the 2012 parliamentary election, Giga Bokeria remained in government for one year. The National Security Council is a body subordinate to the president and he chaired the council until Saakashvili had served out his term and left office.

Bokeria did not leave his post when ex-Prime Minister Bidzina Ivanishvili said that a lot of financing was taken from the budget of the Security Council and UNM had spent this money on lobbyists with the help of Giga Bokeria, who has contact with influential people in the US. However, the Security Council’s spending remained unknown as the documents are secret.

This is the issue Bokeria was questioned about on Friday. He said investigators asked him about the period when he was secretary of the Security Council.

“Part of the documents about lobbyist companies were public. For example, information about the groups in the US who consulted the Georgian government was public,” he said, adding that some documents remain secret.

Bokeria said he thinks it was a ‘political order’ to summon him for questioning.

“It is not a problem that they questions an official, but the problem is that it was a publicly announced order,” he declared.

Bokeria added that he was summoned for questioning right now because the government is in a crisis due to issues like the death of a witness who testified against another former Saakashvili official and the attack on MP Nugzar Tsiklauri.

He said it is a pity that ordinary people working at the Prosecutor’s Office have to spend their time on such cases ordered by “the de facto governor Ivanishvili, the marionette Gharibashivli.”

He also said that it wasn’t specified during the interrogation what amount is considered suspicious.

“To be honest, considering that majority of my party members and friends are in prison or are charged, are being questioned days and nights, it was awkward to summon me so late,” he said.

While he was at the Prosecutor’s Office, his wife Tamar Chergoleishvili, who is founder of the weekly magazine Tabula and TV channel Tabula, waited for him outside.

She said that she is looking forward to how this process ends.

“Nelson Mandela was in prison for 23 years, and my husband will also be able to make it, but I promise to Bidzina Ivanishvili and Gharibashvili that I will raise hell for them.”

The Prosecutor’s Office has not yet commented about the questioning of Bokeria.