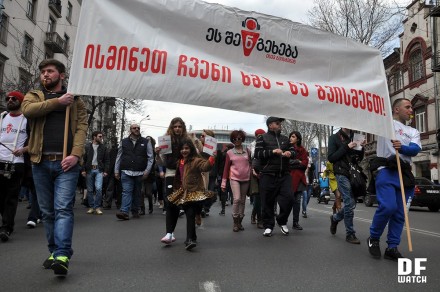 This Affects You Too demonstrates in Tbilisi (DFWatch)

TBILISI, DFWatch–Activists from campaign Es Shen Gekheba rallied against use of people’s private life for intimidation and blackmail and demanded concrete steps from the government.

Up to one thousand activists walked through Tbilisi’s Rustaveli Avenue on Saturday, 19 March, protesting against secret surveillance in wake of recent publications of videos depicting sex life of female politicians.

Two such videos were posted on YouTube earlier this month.

The rally was organised by activists of campaign Es Shen Gekheba (‘This Affects You Too’). The campaign was initiated in February 2012 by a number of NGOs and media companies in a protest against controversial changes to a law about party financing in December 2011, when the United National Movement held majority in the Parliament. Since then, the movement has been actively campaigning against secret surveillance.

During their march, activists held posters with slogans saying ‘Listen to our voice — don’t wiretap us!’ and ‘I’m not affected by other people’s private life, but I’m affected by the fact that people are being intimidated by my reaction’. Protesters chanted ‘No to illegal surveillance’. 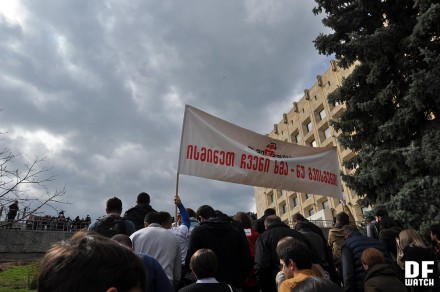 Activists demanded from the government to punish thonse guilty of distributing compromising footages and to create an independent investigative tool to combat spreading of such footage in the future.

‘I’ve received threats that if I don’t leave the country, videos showing my private life will be made public. I declare that I’m not afraid, they can publish them. Today I’m in a greater fighting mood than I’ve been for past 45 years of my life. I will be the person which will contribute to locking up these maniacs and sick people in prison. We’re not afraid of threats, blackmail, and we are not interested in other people’s private life’, journalist Inga Grigolia told journalists. 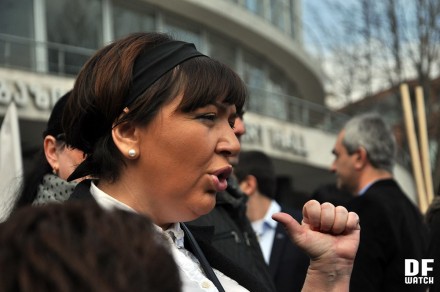 ‘Georgia needs to get rid of remnants of the KGB, such as wiretaps and ODRs [‘agents of the State Security Service’]. We need to make a choice — we’ll start to live like the civilised world, or we’ll continue surveillance. Today’s rally has concrete demands: to punish everyone who’s guilty’, Giorgi Vashadze, MP from the United National Movement (UNM) said.

Lasha Tughushi, editor in-chief of daily Resonansi newspaper said that recent events are against Georgian society and the Georgian state.

“We have to propose certain steps to the government and we want to hear their opinion as well,” he said. 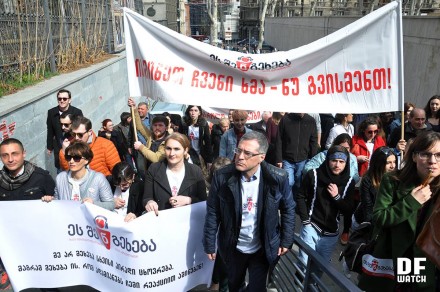 On Tuesday, two people were detained for allegedly collecting, storing, and distributing footage depicting private lives of people. It is currently unknown if this case has any relation to this month’s cases of intimidating and blackmailing female politicians and journalists.

Earlier this month, former prosecutor Maia Mtsariashvili told publicly about the practice in the Ministry of Defence during the period of UNM’s rule, in which specially recruited agents seduced prominent gay people in order to blackmail them with the recorded footage. 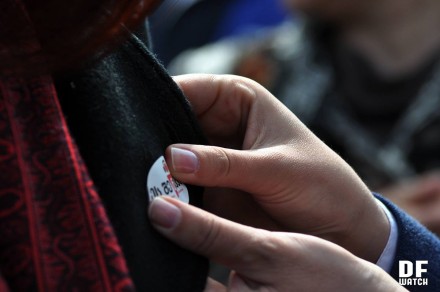 According to the most recent annual report published by the Public Defender’s Office, ‘as of 31 March 2015, the Operative-Technical Department of the State Security Service at the Ministry of Internal Affairs has been authorised to acquire real-time information as a part of establishing of the electronic system of secret surveillance. According to the current legislation, there is no proper oversight mechanism for such activities and secret investigation can be carried out independently of the Criminal Procedure Code of Georgia, leaving the institution with unrestricted power to interfere in privacy without defining the public interest which would justify the interference’.