Campaigners ask for extension of must-carry

Campaigners ask for extension of must-carry 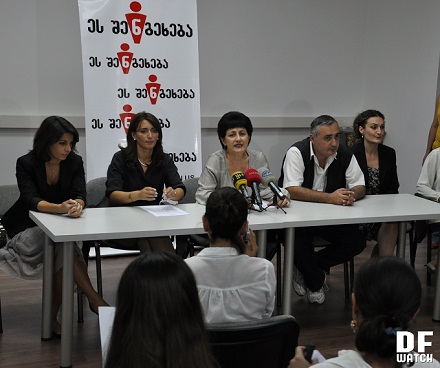 “In order for people to have access to diverse information, it is necessary to extend the transmission after the elections as long as possible,” says Keti Khutsishvili (far right), head of Open Society Georgia.

TBILISI, DFWatch – A democracy campaign in Georgia asks the government to extend the validity of the must-carry and must-offer principles and lift the seizure of satellite dishes belonging to Maestro TV.

This Affects You Too, an umbrella organization of Tbilisi-based NGOs, asks the government to improve the media and election environment in the country.

The principles must-carry and must-offer were recently written into Georgia’s election legislation and obliges cable networks to carry all broadcasters in their network during the last 60 days before an election. The reason is a wish to let people have access to all the different channels in all the regions.

The groups within the campaign think these rules have contributed to providing for equal accessibility to information, but point out that part of the population still has no access.

The campaign considers it important to make these principles a lasting arrangement. As it stands, they will lose force on the day of the election, but come into force again for a 60 day window prior to the next election.

“This creates serious danger for restricting citizens from receiving information on Election Day and after.”

The groups also raised the issue of the seizing of satellite dishes belonging to Maestro TV, which they say contradicts the government’s stated aim, to conduct fair elections.

The group asks the government to set up guarantees that the enforcement of must-carry and must-offer will be extended until the transfer to digital broadcasting; immediately lift the seizing of satellite dishes belonging to media and provide an opportunity to distribute the dishes. Instead of seizing property, the government should monitor compliance with campaign finance rules.

Lawyer Irakli Melashivli explained that it means State Audit Office should prevent the real instances of bribery and not make decisions based on simple assumptions, which leads to business being destroyed and citizens being restricted from receiving information.

“In order for people to have access to diverse information, it is necessary to extend the transmission after the elections as long as possible. Because there is a parliamentary elections ahead, also a president election and who knows how many election processes,” Keti Khutsishvili, head of Open Society Georgia Foundation said at a press conference in OSGF’s office.