Georgia through to EuroBasket 2013

Georgia through to EuroBasket 2013 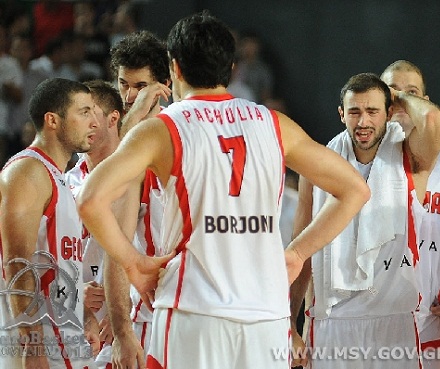 Georgia is through to EuroBasket 2013 after a win against Latvia. (Photo: Sports ministry.)

TBILISI, DFWatch – Georgia’s basketball team Jvarosnebi are through to EuroBasket 2013 after winning 73-70 against Latvia.

The match was played on Saturday evening in Latvia. After the victory, Georgia might end up winning its group in the qualifying rounds, but is anyway past the hurdles to take part in the European championship in Slovenia next year.

The team’s next match will be against Netherlands. It will be played in Tbilisi on September 11.

Current results for Group D are the following: Bosnia-Herzegovina still leads with 14 points as result of 8 plays and 6 wins, followed by Georgia with 12 points – seven plays and five wins; Latvia is on a third place with eleven points – 7 games and four wins, Netherlands – 9 points with seven games and two wins and Romania is on the last place with only one win and eight points.

This week has been a busy one for Georgian sport. The football team defeated Belarus 1-0 in a qualification match for the FIFA World Championship 2013.

Tornike Okruashvili, 20, scored in the 51. minute.

The next match will be against Spain on September 11.