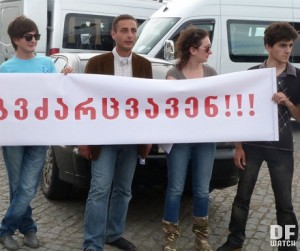 TBILISI, DFWatch – In Georgia, rising fuel prices has spurred a new movement that is questioning the cozy connection between the Saakashvili regime and the fuel companies.

As people are feeling the impact of high gas prices, the new movement says the reason is price fixing.

Fuel prices has rised to be one of the most contentious issues in the debate about Georgia’s economy. A report suggests that President Saakashvili is promoting the interests of the fuel companies operating in Georgia in exchange for personal financial gains, as explained by Beqa Kemluaria, leader of the movement Protest against Georgian Fuel Prices.

The report also includes a discussion of how fuel prices are set in Georgia, compared to European countries.

According to the report, fuel prices in Georgia should have been 0.62 lari lower for gasoline and 0.65 lari lower for diesel. On the international market, the price per ton of gas has decreased from USD 1 227 to USD 998; however this did not affect the Georgian market, where prices remain at the same level. Thus, fuel companies immediately react when international price goes up but tend to neglect when it goes down.

Though according to the Georgian anti-trust law it is unclear whether this is punishable, due to the non-existence of an anti-monopoly agency in Georgia, which should have been controlling actors that tend to monopolize the market and defend the interests of consumers who may be spending more on fuel than they should.

This is not the first time Kemularia tries to direct society’s attention to the fuel market. In December 2011, he came up with a report explaining price generation in Georgia, showing how it is incompatible with the EU pricing standards and claiming that fuel prices in the Georgian market are “unfairly high”. According to him, consumers were ripped off with about 0.4 lari per liter, which in the end resulted for 24 million additional monthly income for the fuel companies.

The main message of the statement is that even though in Europe average wage and electricity tariffs are fifteen and two times more, respectively, then in Georgia, price increment, which should cover expenses as well as profits is twice as much in Georgia as in Europe.

Besides this, the statement includes the three following requests: to decrease gas and diesel prices by GEL 0.62 and GEL 0.65 respectively, tighten fuel quality control, improve the precision of purchased fuel’s volume and weight measurements. The report ends with a request to President Saakashvili, asking him to take into account the evidence presented and start an investigation.

“Your passivity will prove your personal interests in the business and will justify our assumptions that unfair price increments go to your pocket,” the statement ends.

The above mentioned report on fuel prices starts with the problem that the anti-monopoly service in Georgia was canceled, which caused the emergence of business monopolies in the country.

Article 195 of Georgia’s Criminal Code is particularly about monopoly activity and competition. The article punishes the fixing of high or low prices through the formation of monopoly, and restricting competition through separating the market, retaining influence on the market, economic influence or excluding other actors from the market.

On the other hand, Georgia once again started talks to restore the anti-monopoly service, but the process has been dragged out several times.

The service is to be called Agency for Competition and Purchasing and state budget project of 2012 envisages financing the body with about a million lari.

It should be noted that the EU recommended that the Georgian government should adopt an anti-monopoly law, which will be one of the main grounds for starting work on a deep and comprehensive free trade agreement.

But the process to adopt a bill on anti-monopoly has been postponed and it is unknown when it will happen.

Currently, five big companies are dominating the Georgian fuel market: SOCAR, Wissol, Romepetrol, Lukoil and Gulf. They do not have differing prices on fuel, at least not more than 0.02-0.2 tetris.