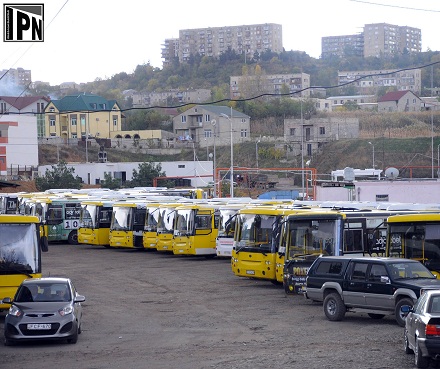 Bus drivers in Tbilisi continued their strike for the third day. (IPN.)

TBILISI, DFWatch — A bus strike is making life difficult for the population in the capital.

For a third day more than 1300 bus drivers have been on strike, as they joined a wave of workers’ protest that erupted after the parliamentary election in October.

Together with transport trade unions they have prepared a list of 17 demands, mainly to improve working conditions and increase salaries.

None of the buses are working in the city. Citizens have to travel by subway, which doesn’t reach all districts in the capital, or by minibuses, which is expensive and due to the strike, full of passengers who squeeze together.

The company that runs the bus service, Tbilisi Transport, claims it is impossible to increase salaries at this stage, as salaries were already increased by 16 percent in July and the company can’t afford to raise them even further.

Thursday there were negotiations with Tbilisi Council and Transport Company; however unsuccessful. Strikes continued on Friday as well.

Mayor Gigi Ugulava apologized to citizens and said he would solve the issue as soon as possible. He also underlined that the current budget doesn’t allow for a doubling of salaries of drivers, but from January it will depend on a decision by the new government.

On Friday, Tbilisi City Council decided to set up 15-person working group, which will study the problems in the transport system and present its findings to City Hall. In the working group there will be members of an initiative group of drivers in order to know all the details of the process.