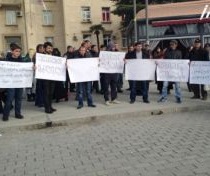 Minibus drivers in Rustavi demand that the competition is postponed at least three years. (Interpressnews.)

TBILISI, DFWatch–Minibus drivers in Rustavi southeast of Tbilisi are on strike.

According to the drivers, passengers will have to pay more to take minibuses both inside Rustavi and to Tbilisi.

The drivers of these minibuses Friday refused to bring passengers.

Rustavi City Hall asked for help from other cities’ transport services, but the drivers on strike did not let these minibuses enter Rustavi.

Rustavi City Hall denies the drivers’ claim about increasing prices. According to Tamuna Akubardia, Head of City hall’s press office, the issue of privatizing and having a competition for the transport is still being discussed and it may be approved or rejected.

“It’s written clearly in the rule that the prices should not be raised, no matter which transport company wins,” Akubardia said, and added that the rules also guarantee that every driver will keep their job.

Rustavi Mayor David Jikia said the drivers have paralyzed the city and their strike was sabotage. The strike stopped after he met the protesters.

“The mayor promised that our demands will be fulfilled and asked for one day to solve the issue. We think the answer will be positive, so we decided to continue working, but if the answer is negative, we’ll continue the strike,” said Zaza Chikhladze, one of the drivers.