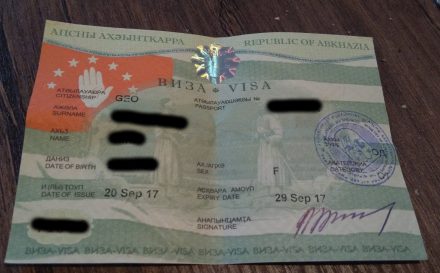 “We are absolutely deprived of any civil rights. We feel like we are being forced out of our homes,” a young man living in the village Nabakevi told DFWatch.

Leaving their homes would necessarily mean moving from the breakaway region to Georgia proper.

But the de facto authorities are unlikely to see any gains from displacing the ethnic Georgians, as the trade going on in Gali, for the most part in hazel nuts, is a significant source of income for the breakaway region. On the other hand, they have stripped Gali resident of most of their civil rights, continuing a policy of discrimination that began after the Georgian-Abkhaz conflict in the early 1990s.

The latest addition to this ongoing policy is a new document about permanent residence, dubbed Form #9.

Since 2008, the de facto regime has begun issuing Abkhazian passports. This practice was soon discontinued, and nowadays local ethnic Georgian can get five kinds of documents to either live in or travel to the breakaway region. These include the so-called visa, an old Soviet passport, an Abkhazian passport, Form #9, and residence permit. However, getting all of these documents is problematic and requires money, and for Georgians living in Gali crossing the administrative border is becoming more complicated day by day.

“We use visas every summer, but they are not easy to get. It takes 10 business days to get a visa, but this term is often extended for the whole month, sometimes for two months, but during this period he summer is over, and there are many cases when the money is paid and the guest is not able to visit us, because the summer is over. Often it also happens that a visa isn’t issued or a person with a visa is denied entry by the Russian border guards. If you give a little money [as a bribe], you can get it earlier,” a 50-year-old teacher from Gali told DFWatch.

Those who possess Abkhazian or Soviet passports can cross the de facto border freely, but cannot be sure about how long their documents will be valid. However, only a few Gali residents have Soviet or Abkhazian passports. It is currently almost impossible for Gali Georgians to obtain the latter.

“I had to visit the Gali administration three times to obtain an Abkhazian passport. I had collected all the necessary documents and paid the appropriate amount of money,” a university student from the village of Tagiloni told DFWatch.

However, a problem arose when a clerk who was ethnic Abkhaz noticed what she perceived as a technical flaw in the document.

“An employee in the administration was irritated and she threw the document literally in my face,” she said.

After that, I left and went home, but my mother told me that without this document I’d be denied entry to Gali,” she continued.

Eventually, the student went on to proceed with the procedure, yet several years later, she still hasn’t got the passport.

A Form #9, like a visa, is issued for various periods and the price depends on the term of validity. It can be made valid for a period of up to six months. The cost for a one month Form #9 is 1,000 Russian rubles (USD 16.80).

A Gali resident told us most of the population are now using this document because it takes the least time to obtain. Hence, those who do not have any other documents have to pay 1,000 rubles per month. Nowadays the document is usually issued for a month, while a couple years ago it had up to three years period of validity. The reason for this change is the regime’s desire to get more money, locals say. They believe the separatist authorities are trying to impose as many bureaucratic hurdles on the Georgians in Gali as possible but, at the same time, to such an extent that it doesn’t cause them to flee to Georgia proper. Thus, for them eventually only the right to live will remain, Gali Georgians fear.

It seems that the Sokhumi regime will solve this problem by a relatively new kind of document, a residence permit, which is relatively “high-tech” by the separatist standards of bureaucracy, but even getting this document is associated with certain problems.

“The document cost me about 600 laris (USD 220). They demanded a lot of documents. You should have a birth certificate, a certificate issued by the head of the local administration, a tax receipt … After a three-month wait, it turned out that there was something wrong in the birth certificate and I had to do it over again. Eventually I got the document, but it turned out that it doesn’t give any rights except crossing the border and even here you have restrictions, you should live here [in Gali] for six months and only after that you are allowed to cross the border [back to Georgia proper],” a young man living in the village Nabakevi told DFWatch, adding that the document doesn’t grant him teh right to buy a house, a car, a land plot, or to take part in elections.