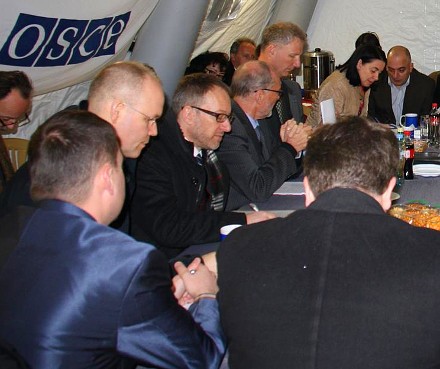 TBILISI, DFWatch–As representatives of Georgia and the breakaway region South Ossetia sat down on Tuesday for a regular field meeting, one of the major topics of discussion was the situation in the village Jariasheni, where construction work is in progress.

The meeting of the Incident Prevention and Response Mechanisms (IPRM) was, as usual, held at Ergneti, a village that lies on the administrative boundary line (ABL) around Georgia’s breakaway region South Ossetia.

Davit Sanakoev, the representative of South Ossetia at IPRM meetings, told Sputnik Ossetia that the parties discussed many issues, including statistics on border crossings. Sanakoev claimed that Georgians have been ‘deliberately’ crossing the border lately.

He drew attention to a protest held in a village Jariasheni, with flags and posters near the ABL while construction of a fire trench was in progress.

“We call on the Georgian side to maintain the stability on the other side of the border,” he said.

Sanakoev explained that the decision to construct the fire trench was made due to ‘frequent shooting’ from the other side of the ABL.

The State Security Service said that they condemned the illegal work in the village Jariasheni.

“We discussed the difficult condition at the so-called border as a result of the construction of barbed wire, fences and signs, which causes a lot of problems for the population on both sides,” the service said.

According to the Georgian participants at the meeting, they also discussed the issue of irrigation water and cleaning the old water canal.

The next IPRM meeting will be held on April 20.