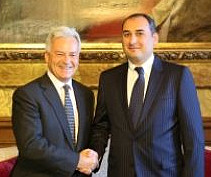 TBILISI, DFWatch–Sir Alan Duncan, United Kingdom’s Minister for Europe and the Americas, visited Georgia this week to take part in bilateral talks about reforms and security.

The Waldrop dialogue is an annual conference between representatives of the two countries’ governments. This year, for the first time the two sides met in Tbilisi.

One tangible result was a promise by Duncan that the UK will support Georgia’s democracy reforms with GBP 4.5 million over the next year.

“Georgia is playing a vital role in the stability and security of the wider region. Georgia’s progression towards Euro-Atlantic integration, both through NATO and the EU, will only serve to build on the progress already made,” Duncan said.

Oliver Waldrop was a British diplomat who was posted in Georgia during the crucial years 1919-1921 and later promoted the study of Georgian culture and literature at Oxford University.

The bilateral talks were initiated by former Foreign Secretary William Hague in Tbilisi in May 2014, and the first meeting took place that year in November. The UK’s Foreign Office wrote then that the aim was to ‘discuss mutual issues of concern, and identify new areas for cooperation.’

The topics at the first round of talks were foreign policy, national security and defense, and commercial, economic and energy issues, according the a summary posted online by the Foreign Office.