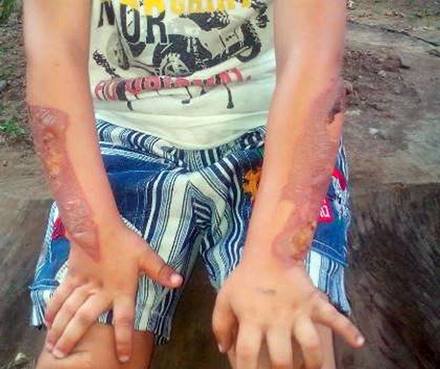 A four-year old boy was tortured with an iron in a village in western Georgia Wednesday. (Interpressnews.)

TBILISI, DFWatch–The torture of a 4-year old boy in a village in western Georgia has shocked Georgians and made many question official statistics indicating a significant decrease in crime.

Two days ago, Ketevan Arveladze was at home alone with her 4-year old when masked persons attacked them and demanded money. 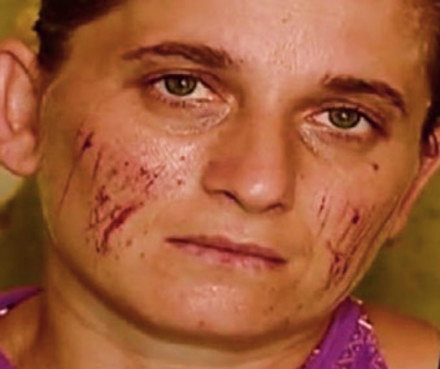 The boy’s mother, Ketavan Arveladze, was cut in the face with a razor after she refused to give the attackers money. (Rustavi 2.)

Arveladze resisted, and then the attackers burned her son’s hands with an iron and cut her face. They took some gold jewellery.

Police detained a suspect soon after the incident and said there were three attackers who broke into the Arveladze house, threatening to kill them if they didn’t surrender their money. The investigation has established the identities of all three attackers and the search for the remaining two is continuing.

The incident has set off another debate about what the real level of crime is in Georgia. According to the most recent data, published by the Interior Ministry on August 15, there was registered 15,064 crimes in the first seven months of 2014. This is a 17.09 percent reduction, compared to the same period last year.

But many even from Georgian Dream coalition distrust these statistics and question the effectiveness of the 27-year-old interior minister, with the National Movement party calling for his dismissal.

On Friday, police detained a suspect in the fatal shooting of 25-year old Lasha Makharadze in Tbilisi on September 2. Makharadze initially survived, but died later in hospital. The suspect turned out to be a person who was convicted of murdering Levan Talakvade in 2010, a crime which he was sentenced to 13 years in jail for, but he was later pardoned by the pardon commission.

For the last few weeks, there has been more media reports of murders and crime. In late August and early September, at least 11 people were killed and 13 injured in Georgia. This is going by the media reports only; the real number may have been higher. Most of the murders took place in Tbilisi.

September 2, the day Lasha Makharadze was killed, another murder, on an ethnic Azeri, also took place at a restaurant in Tbilisi. One more person was also injured that same day in the capital.

In Marneuli, there was a murder on August 31. The victim was Shahin Abilov, 29. A murder took place in Tbilisi on August 30 and the same day five people were injured at a restaurant elsewhere in Tbilisi.

As previously reported by DF Watch, August 28, three people were killed in Adigeni, southern Georgia, and one was injured.

There were also other murders in the beginning and middle of August.

The National Movement and human rights groups urge the government to take measures to fight crime.

Public Defender Ucha Nanuashvili said on Friday that fourteen women were killed this year in Georgia and the most alarming situation in regards of violence towards women was in May, where three women were killed.

“The trend is continuing. It is therefore important that the government takes steps to solve this problem.”

The ombudsman has asked for information and statistics on the crime situation in Georgia.

Also on Friday, Prime Minister Irakli Gharibashvili claimed that the media is deliberately trying to focus on crime.

He claimed that the crime situation is quite stable in Georgia and the government is trying to control it as much as possible.

Gharibashvili expressed his condolences to the families of victims crime, but said that crime happens everywhere, in every country.

The PM instructed the interior minister and the minister of justice to tighten legislation about carrying a weapon.

Justice Minister Thea Tsulukiani said she will present a draft about this at the next government session.

She said the situation has become very difficult and many are afraid to go outside.

One of the reasons for this, she said, is the mass amnesty passed by parliament last year, which led to the release of thousands of prisoners.

On Friday, Gharibashvili said that during the previous government, prisoners were held in terrible conditions and the new government introduced an amnesty that released thousands of them outside.

Minister for Reconciliation and Civil Equality Paata Zakareishvili said Friday that the crime level is falling, but that the media has begun covering every single criminal incident. He says that the media didn’t cover crime during previous government like it does today.

Deputy Interior Minister Levan Izoria also claims that the level of crime hasn’t gone up and that the statistics is proof of this.

“Falsification of statistical data is punished by law. Changing information in our database and manipulation with them is impossible,” he said, underlining that the ministry’s statistics doesn’t’ lie but the thing is that people are more informed now than during the previous government and most media outlets cover crime issues first.

MP Tina Khidasheli from the Georgian Dream coalition responded to this issue by writing that even if there are the same number or less crime now than during the previous government, it doesn’t change anything.

She says it is easy to be better than UNM but it doesn’t mean being good.

“Even more, if you compare yourself to them it doesn’t make you nice.”

Khidasheli writes that people don’t expect the new government to claim that crime took place during the previous government, but they expect to see how the new government will fight crime, fight violence against women, against carrying a weapon, protection of youth.

“Experts must be doing statistics, but everyone expects specific views from you,” Khidasheli wrote in a posting on Facebook.

According to survey of public attitudes conducted by the American National Democratic Institute (NDI), 29 percent of people in Georgia think the level of crime has increased after the parliamentary election in 2012, while 51 percent thinks it has stayed the same. Ten percent said it has decreased, while 9 percent said they don’t know.