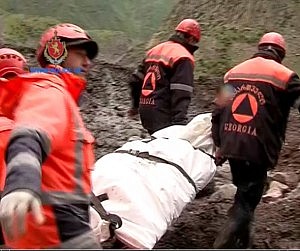 Eight people have so far been killed this year in landslides in Dariali Valley. (Police.ge.)

TBILISI, DFWatch–Geologists in Georgia say heavy rainfall would cause another landslide in Dariali Valley, where eight people have already been killed this year in two natural disasters.

Six people were killed in a landslide in Dariali Valley May 17, and two more in another landslide August 21. Both times, masses of mud blocked the only road connecting Georgia with Russia.

Svetlana Nioradze, head of the monitoring and forecasting service at the Environment Ministry, told Interpressnews that heavy rain is expected in eastern Georgia.

There has been heavy rainfall in Sagarejo and Kvareli, eastern Georgia and its mountainous regions, including Dariali valley, Stepantsminda and Gudauri.

Now, forecasters are predicting heavy wind in the western parts of Georgia. September 7-8, brief rainfall is expected in all of Georgia, but the temperature is not going to change until September 14. 36 degrees is expected on the average.

A heavy hailstorm on Thursday damaged villages in the Kakheti region in eastern Georgia. According to locals in the village Saniore, the storm lasted only ten minutes but destroyed vineyards.

Alexandre Shatirishvili, head of Telavi municipality, estimated that 100 tons of grapes had been destroyed.

The hailstorm also damaged vineyards in Kvareli, especially in the village Shilda. Local authorities are now estimating the damage.