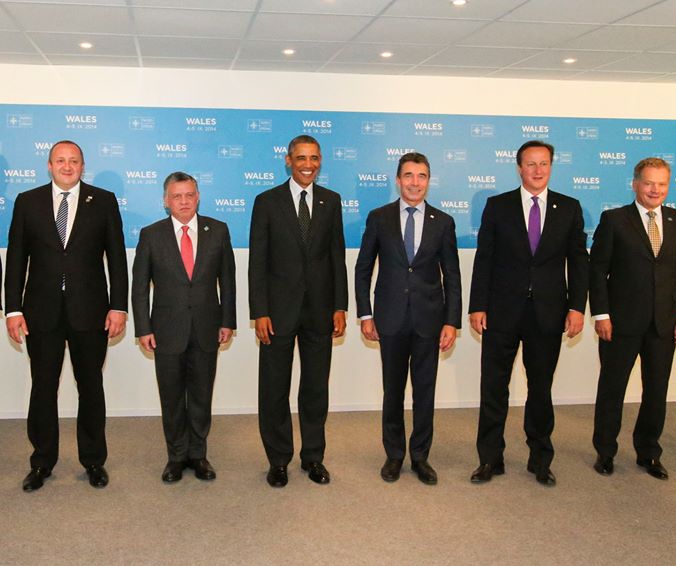 Heads of state of NATO and partner countries at the Wales summit.

TBILISI, DFWatch–A 113 point declaration passed by leaders of NATO countries at the summit in Wales has two points about Georgia.

Apart from support for Georgia’s sovereignty and territorial integrity and a commitment that it will become a member of NATO someday, the resolution also described the new ‘substantial package’ which Georgia was offered instead of a membership action plan (MAP).

‘These measures aim to strengthen Georgia’s defense and interoperability capabilities with the Alliance, which will help Georgia advance in its preparations towards membership in the Alliance,” it reads.

93rd point mostly focuses on NATO’s recognition of Georgia’s progress in democratic development, including transfer of power after the elections in 2012 and 2013. NATO again expresses appreciation for Georgia’s contribution to the ISAF mission in Afghanistan.

“Together with Georgia’s offer to participate in the NATO Response Force, these contributions demonstrate Georgia’s role as a contributor to our shared security.”

The declaration refers to the decision made at NATO’s Bucharest summit in 2008 that Georgia will become a member of NATO.

The 94th point is focuses on Georgia’s territorial integrity and sovereignty and that it fulfills cease-fire agreement, and has made a commitment not to use force to solve the conflict with two breakaway regions.

“We continue to call on Russia to reverse its recognition of the South Ossetia and Abkhazia regions of Georgia as independent states and to withdraw its forces from Georgia.”

In the rest of the document, Georgia is mentioned along with some other states. It says NATO is concerned about Russia’s violating international law by its actions towards Georgia and Moldova, and that allies are committed to support for the territorial integrity, independence and sovereignty of Armenia, Azerbaijan, Georgia and Moldova.

“The Initiative builds upon NATO’s extensive expertise in supporting, advising and assisting nations with defense and related security capacity building. Building on our close cooperation and following their requests, we have agreed to extend this initiative to Georgia, Jordan, and the Republic of Moldova,” it also says.

Heads of government from NATO member countries met in Wales September 4-5. The Georgian delegation was led by President Giorgi Margvelashvili.

He said in an interview with the Georgian Public Broadcaster that he is satisfied with what Georgia achieved at the summit, which in his view is comparable to a MAP.

“But I don’t want to lie to society and say that we won’t need a MAP. We might not need it but nowadays we cannot say that MAP won’t be necessary anymore.”

During a press conference on Friday, NATO Secretary General Anders Fogh Rasmussen said that Georgia wants to further improve its ability to work and operate together with NATO forces. The country has taken remarkable steps toward that, but ‘more could be done,’ he said.

“And I’m pleased that Georgia accepted the invitation to participate in that selected group of nations that want a particular close relationship with NATO,” he said referring to a group of Sweden, Jordan, Finland, Australia and now Georgia.

“But of course there’s also a very concrete dimension that Georgia’s participation in that group will step up Georgia’s practical military cooperation with NATO.”

He said that the package which Georgia is offered will help the country advance in its preparations toward membership.