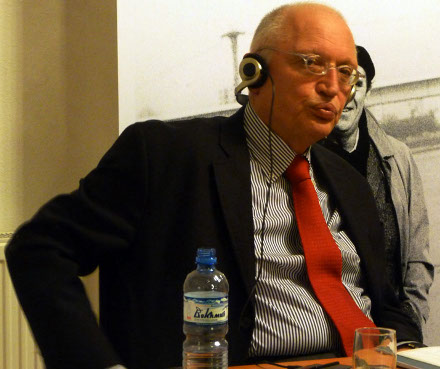 Regardless of how Europe’s geographical extent is measured, the cultural connection to Europe has long been a presence in Georgian culture. This was one of the topics brought up when former European Commissioner Gunter Verheugen spoke at the Heinrich Böll Foundation in Tbilisi last weekend.

Verheugen explained that it might be said that in the current political and economic situation, Europe should only think about itself and not about expansion, but then he added “It’s hard to separate the Georgian future from the future of Europe.”

Becoming an EU member shouldn’t be a privilege, but a right for each subject which considers itself part of Europe, he said.

Keti Tsikhelashvili from the Eastern Partnership mentioned recent research they have conducted which shows that there is 80% support for EU membership in Georgia.

Gunter Verheugen considers this result very positive and he says that the idea of Europe’s unity is not about it being united without Georgia or even Russia.

“The idea of Europe’s unity is that any country has the right to get involved in this partnership. This idea is strengthened by various agreements too, for example free trade agreement.”

Verheugen said Georgia is a problematic country for the EU, but despite the EU’s hesitation to accepting Georgia among its ranks, Georgia should go the way to the end which goes to Europe and on which Georgia is already standing.

The Deputy Foreign Minister of Georgia, Tornike Gordadze, spoke about the country’s achievements and perspectives for Georgia’s European integration.

He mentioned a recently adopted document by the Council of the EU about the South Caucasus, where there is a chapter about Georgia.

“The EU acknowledges the European aspirations and European choice of Georgia and its commitment to building a deep and sustainable democracy. The EU welcomes Georgia’s efforts in modernizing and reforming its society and fighting corruption.”

Appealing to this part of the document he said that this is not Georgia’s direct perspective for EU, but this is already progress. He discussed the other important issues from the document, than added that Georgia has already started negotiations about a deep and comprehensive free trade agreement with the EU. He says Georgia has been preparing for these negotiations for two and a half years.

“EU itself says that the negotiations shouldn’t last long, possibly two years. This of course doesn’t mean that the membership issue is resolved from a long or medium term perspective,” Gordadze says.

The Deputy Minister also the ongoing negotiations about an EU Association Agreement, expressing hope that they would be completed by the end of the year, as 75-80% of it is already agreed.

Ketevan Tsikhelashvili considers that the whole process is way more important than the result itself in this case. Once again talking about the survey done by the Eastern Parthership, she said many people in Georgia don’t know much about the EU, and some even think that Georgia is already a member. She said people need to know more about European Union, and said that people are ready to learn.