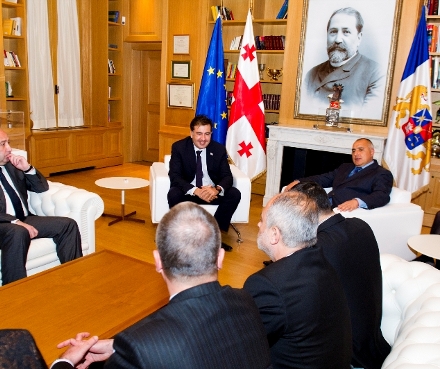 TBILISI, DFWatch – Bulgaria expresses its full support for Georgia’s integration process towards NATO and the EU.

Specifically Borisov said his country supports Georgia in the negotiations with the EU on free trade and issues about visa liberalization with Europe.

According to president administration, the meeting was held at the president’s residence in Tbilisi.

Borisov is accompanied by a delegation of Bulgarian officials who are in Georgia for an official two-day working visit. The prime minister held meetings with his Georgian colleagues and other representatives of the government.

According to the president’s administration, the main topic during the meeting with the president was implementation of strategic programs between the two countries, regional cooperation and support in Georgia’s process of integration with European structures.

They spoke about specific programs for implementation between the two countries, including possibilities for exporting energy resources that bypass Russia.