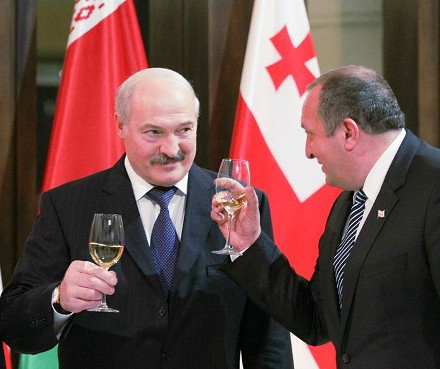 TBILISI, DFWatch–Belarusian President Alexander Lukashenko Thursday called on Georgia to live in a ‘common family’ with Belarus and Russia.

“Europe’s last dictator” said he has never been to Georgia before, except Abkhazia, one of two Georgian regions that broke loose in the 1990s and came into Russia’s orbit.

Touring the Georgian capital for the first time in his life, Lukashenko said that there is no misunderstanding between ordinary people in Georgia, Belarus and Russia, but it is a matter of high level politics.

Since Georgia and Belarus have chosen two different foreign policy directions, one toward the EU and the other toward the Eurasian Union (formerly called the Custom’s Union), Lukashenko was asked how the two countries should act to normalize relations with Russia.

He also said that even though Georgia has left the Commonwealth of Independent States (CIS), the two countries still have free trade between them.

“We never betrayed you in the most difficult situation,” he said.

Lukashenko Thursday met with his Georgian counterpart Margvelashvili, and said it is a ‘shame’ he has never been to Tbilisi before.

“In fact, I have never been to Georgia, apart from Sukhumi, where I was in the Soviet period,” he said.

Belarus’ leader seemed to enjoy his stay and drew attention to his background as historian, and said he has read a lot about Georgia and thinks it has always been a ‘legendary country.’

“I should have come here long ago,” he added.

Signed statement on integrity of borders

Russian President Vladimir Putin has wanted Belarus to recognize Abkhazia and South Ossetia as countries, but Lukashenko said earlier that recognition of the two regions is not a ‘matter of life and death’ for Russia. http://www.regnum.ru/news/polit/1718878.html

“Why today, in terms of the well, not even a wise, public policy, but just a normal, sane policy to haunt this problem and claim recognition and recognize?” he said. “Of course, if this is a matter of life and death, then we won’t even argue and talk about it.”

Georgia last year signed an association agreement with the EU, which includes a set of strict conditions upon which trade will take place, called a ‘Deep and Comprehensive Free Trade Agreement’, while Belarus became part of the Eurasian Union as it came into existence on January 1. But this doesn’t influence relations between the two, according to Lukashenko.

Right before the meeting, the presidents signed a 15 point statement which includes respecting the sovereignty and integrity, immunity of borders, non-acceptance of use force or threats. The two didn’t speak to media about the details of the document.

Lukashenko later on Thursday said that during meetings in Tbilisi, agreement was reached about building common factories either, on Georgia or Belarus, to produce ‘important products’ and sell to the world. He said Belarus is also ready to help Georgia with technology, transport and medicines.