Behind the battle lines of a miners’ strike

Behind the battle lines of a miners’ strike 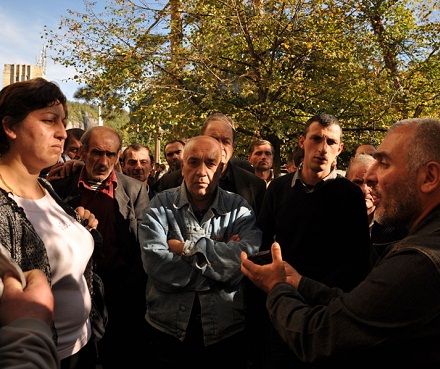 Georgian miners have been on strike for three weeks, and spirits are still high. It's now or never, they reckon. (DFWatch photo.)

TBILISI, DFWatch — The miners in Georgia are not giving up as they enter their fourth week of protest in the village Chiatura.

More than 3600 workers demand a substantial pay rise and improvement in their slave-like working conditions. They started protesting outside the management building of the company that owns the mines three weeks ago. Ten of the miners took the protest one step further 19 days ago by sitting down two km inside the mine.

DF Watch visited the workers on strike in the west Georgian town Chiatura, which is situated between two mountains, where long ago there used to be a lake, instead of city, according to locals. Workers still crowd outside the entrance to the administration building. From time to time, management staff look out of the windows staring at the workers on strike, while they shout different messages like ‘our time will come, your time will end soon.’

Having no money for food some of the employees are on the verge of going back to work, which causes anger among the others. Leaders hold speeches appealing to the rest: ‘we cannot give up right now. We knew what we were planning to do. We cannot go home now; we cannot betray 3 600 people just like that. Even though we are broke and hungry, we must stand together and once and for all end these slave-like conditions.” 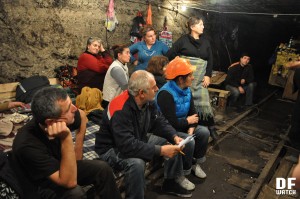 There are seven mines in the town, and several plants. All of them stopped functioning when the protest started. Friday Georgian Manganese, which is the owner of all the mines and plants, released a statement, which says that consensus was achieved with workers and majority of them returned to work. According to the statement, November 1 the majority of strikers decided to continue working and production is restored at about 4 mines, and partly restored at two, while one mine is still paralyzed by the action.

However, the same day we visited two of the mines mentioned in the statement, no work was ongoing there. Some workers explain that the management spreads lies in order to reduce the wave of strikes, also management representatives threaten some of the workers and force them to go back to work; but none of them have complied.

Roland Abdushelishvili, who works at the manganese washing plant, led us around to different places in Chiatura. He says a couple of hundred people employed in the mines are relatives and family members of the management, who are forced to work. That’s why the management claims work has been restored.

2 km inside a mine named after Pataridze, there are ten men and 17 women, who are camped deep inside the mine. They don’t plan to leave until their demands are fully met. There are wooden beds for strikers who for the whole day do nothing but play cards, debating or reading magazines and newspapers, which are brought to them by other workers together with food. There is a small corner for praying full of icons. In the other side there is a small mirror for shaving and lots of blankets. The cave is cold and moist.

Workers at Pataridze mine prepare a wagon to carry people for us to take inside. It is a small rusty wagon with wooden chairs inside. We are given newspapers to cover seats and sit steel, not to put hands outside its windows as there are naked cables inside the mine, which you cannot see in dark. It takes about twenty minutes in near darkness and loud noise from the railway to reach the strikers inside. 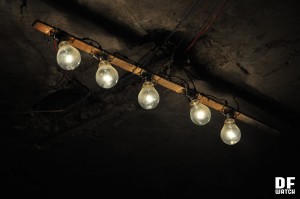 Light bulbs installed with naked cables on a wooden stick.

We see light bulbs installed without plastic cover, with naked cables attached to wooden sticks. When we asked why all the lights are installed that way, the workers told us management was saving money and didn’t buy so-called patronas for bulbs, which would make it safe. Light is reduced to small watts and is located in about 40 meter of distance from each other. It is almost dark while we walk. If you are tall, it is dangerous to walk in the center, as cables for wagons are low and also naked and therefore dangerous to touch. Workers have died from unsafe electricity, we were told.

Tea Kipshidze is one of the women on strike. She joined the others on Thursday. She is four months pregnant, and already has three children. She has been working for six years on duty at the dryer’s. Her salary is nearly USD 120, which is not enough to feed her children and she is always in debt.

“I decided to join the strike, because I think it is enough. My salary is less than minimum, impossible to save my family,” Kipshidze tells us. “I do not request something impossible, just something solid. 100 percent of my salary will be 400-350 lari. It’s not enough for normal living, but at least it will mean less debt.”

“We deserve an 18-day vacation a year, but we get two days of rest – New Year’s and Easter. And when there are holidays, if one person leaves, the rest works without resting, without being paid additionally.”

Women do not get food. But men tell us their food is humiliating, not healthy for eating.

“What is this egg that they feed us? What lays it – Guinea fowls? It is so small and as for the chops, even dogs refuse to eat them,” says Boris Kusiani, a driver of people and manganese wagons. Others agree with him, laughing.

“There are dogs at our depot. If you throw the chop to them, they smell it and leave without eating,” others agree with him saying that usually workers refuse eating and prefer to eat once a day, when they get home. 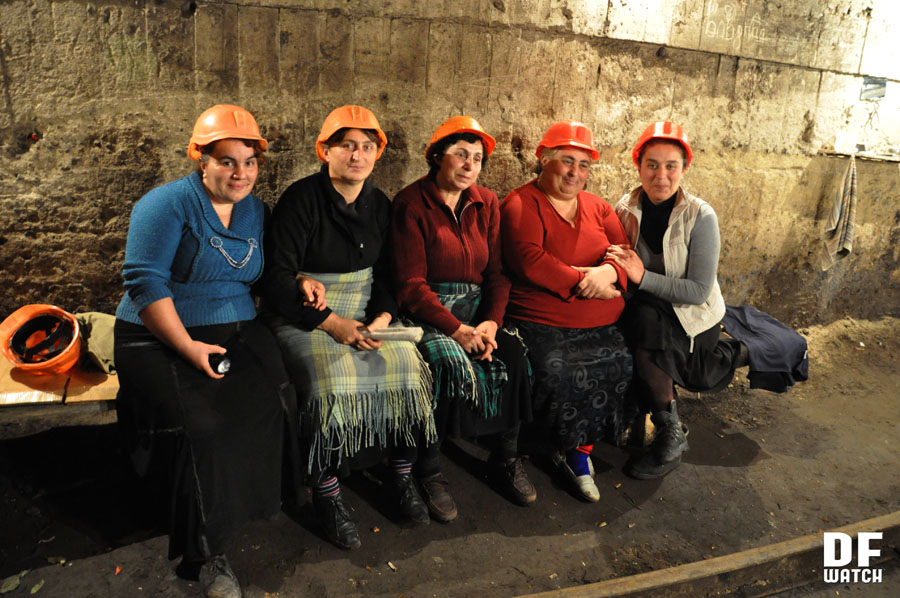 Tea Kipshidze (right) is four-month pregnant worker, who joined strike 2 km inside the mine with 16 other women.

Tea Kipshidze doesn’t plan to leave the mine despite being pregnant, until the strike ends. Merab Iakobidze, is among those men who started the strike with the others inside mine 18 days ago. It’s been 37 years since he started working here and says for all those years he cannot remember things going better, only to the worse.

Iakobidze plans to sew his mouth shut and give management one day to agree to improve conditions for workers.

“I’ll sit here with a sewed mouth. I promised 2 700 people and I will even risk my own life for them now,” he says.

Until now other employees from the shift, where workers striking inside the mine work gather money outside to buy food and bring clothes to them.

Walking in lines of strikers outside administration building, workers approach us one to another, telling us about their problems.

Boris Kusiani has been working in Chiatura for 30 years. He is a locomotive driver.

“I don’t have air in the mine. They make me bring everything, like patronas for light bulbs – you have a salary – they tell me,” he said, and remembers that his boss once told him to tie 300 volt cables with the same plastic bag he used to keep his lunch in. 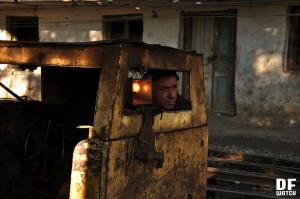 Kusiani says wagons that are used in mines are from the period when Leonid Brezhnev used to be General Secretary of the Central Committee.

“No one knows when those wagons will break. We don’t know they’re rusty.”

Another problem is that drilling machines should be located in each ten meters, but they are kilometers away and workers carry heavy loads on their neck, while there is no air inside and you need to go outside the mine to breathe fresh air.

Workers say it may not be correct, but they remember Soviet times, when they had the weekends off.

Strikers say this is not the first time that they protest; however none of the previous strikes produced any results. Now the government has changed and they have hope.

“Everything goes back all the time. We have soap, which we wash instead of it washing us, and there is a massacre inside,” Kusiani says. “When I go home taking clothes for washing, my child asks me what did I bring for him. Nothing, I say. Just my clothes.”

Roland Abdushelishvili took us to see everyday conditions of workers describing the situation. Workers should be given working 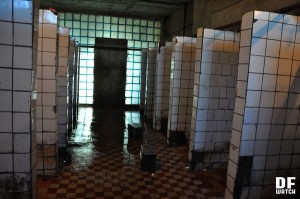 Showers for workers, where there is no windows and heating in the winter.

clothes and boots, but instead of rubber boots, workers bring home what they have, and if the uniforms they have been given tear a single time, then they also bring clothes from home.

We see only several uniforms in wardrobe for workers. The rest are old clothes from home. It is cold there, no windows. At the end of the wardrobe there is a bath with no heating. Several persons may wash at a time, while others wait in line for an hour to wash and finally go home.

“They finish working and washing at about 12:00. Then they leave and go back to their villages, as temporary living houses at the plants do not function any more. In the morning they have to be outside until 8 for car to bring them back to the plant.”

The latest negotiations with management once again ended unsuccessfully.

First, workers demanded a 100 percent increase in their salary. Now they will agree to a 40 percent pay rise and improvement in their humiliating conditions, but there is still no confirmation from the management.