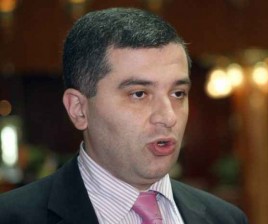 Presenting his party’s initiative on Thursday, Bakradze also repeated his request for a meeting with Prime Minister Ivanishvili to discuss the crisis.

“Our initiative is to adopt a common national agreement act, which would regulate difficulties in the future in case of government changes in the transition period,” he said, adding that the act will avoid all problems which exists in Georgia nowadays after the change of government, and also problems in the economy.

Bakradze offers the Ivanishvili government to coordinate work in order to solve issues in the economy and fight unemployment.

“There must be stability and instead of fighting with each other we must take care of the economy,” he added.

The National Movement reiterates its demand for a tax amnesty for the business sector; an initiative originally launched by the party’s leader, President Mikheil Saakashvili, and also to cancel commodity invoices for small businesses. The party further wants to introduce a rule that a less than 10 percent error in paid taxes should not be punished by administrative rules, but such errors should instead be simply corrected in the final tax audit.

Minister of Economy Giorgi Kvirikashvili answered the same day that he is ready to meet with Bakradze, but such a meeting must have ‘a constructive form’, he told journalists.

“We mustn’t announce a boycott of each other because it won’t be good for the economy,” he said. “This past boycott somewhat resulted that we must have had good economic growth and today those numbers haven’t been achieved.”

Kvirikashvili also said that next year there will be serious changes in the economy.

Georgian Statistics Department’s final report shows that Georgia’s economic growth in June was negative 0.8 percent compared to last year. Publication of the new figures spurred criticism from the former ruling party which claims it is a result of the new government’s failed economy policy.

Bakradze asked Prime Minister Ivanishvili for a meeting to discuss the crisis, but the prime minister has so far not responded.