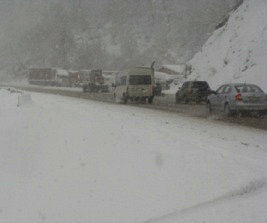 The main road connecting eastern and western Georgia is closed due to bad weather. (Interpressnews.)

TBILISI, DFWatch–More than 70 000 households in Georgia are left without electricity due to strong wind and snow according to the utility company Energo-Pro Georgia.

Electricity was switched off as the lines are damaged and technical crews are now working to rectify the problems. Bad weather interrupt their work, but the company representatives claim that they will do the best to restore electricity supply in near future.

There is a storm in the cities and towns on the Black Sea, where there is also a problem with electricity supply.

In Poti the power has temporarily been knocked out while a 25 m/sec wind is raging.

A reporter for Interpressnews writes that traffic is suspended in Rikoti Pass – the main mountain road which connects eastern and western parts of Georgia. Due to snow, a truck slipped and blocked the road, creating a traffic jam. Police and road services are working to clear the road for traffic.

There is high winds and snow at Rikoti. Trailers are prohibited from moving through Rikoti, while the road department recommends that people use snow chains on their cars.

The department is trying to clear the road of snow and ice.

The wind also damaged the House of Justice in central Tbilisi; a massive building at the River Mtkvari built by the previous government which houses several governmental bodies and organizations. The building was completely evacuated as many roof tiles fell off.